COVID-19 situation report: The latest coronavirus updates from the US military

COVID-19 SITREP is a collection of the latest coronavirus updates affecting U.S. military service members and their families from Task & Purpose. 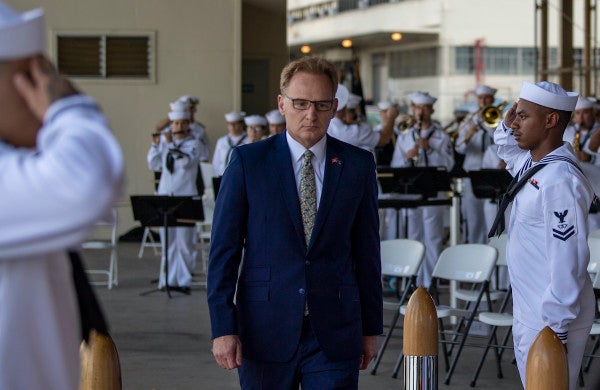 The U.S. military is nearing the 4,000 mark for service members infected with COVID-19, with DoD now reporting 3,919 total cumulative cases among troops.

The COVID-19 response continues, with more than 56,000 DoD personnel now supporting relief efforts, according to the Pentagon.

We have to start off today's dispatch with yet another note about the statistics coming out of DoD. Since March 18, the Pentagon has been sharing daily COVID-19 “fact sheets” with the latest news on their response to the pandemic along with a breakdown of how many confirmed cases they were tracking among service members, civilians, and family members.

The Department of Defense is on track to have more than 5,000 confirmed cases of COVID-19 among service members, dependents, and civilians by this weekend.

Confirmed COVID-19 cases within DoD went up by nearly 700 overnight, although the increase was likely a result of data collection issues. Daily numbers being tracked and issued by the Pentagon have swung wildly on some days (as we've noted below), suggesting that the military doesn't have a firm grasp on the scope of the pandemic.

We've reached the point in the COVID-19 crisis that we're now debating haircuts. That's where we are right now.

The Navy is now battling a growing COVID-19 outbreak aboard the hospital ship USNS Mercy, which is stationed at the port of Los Angeles.

The Pentagon reported its largest increase of COVID-19 cases over the weekend, adding nearly 900 to the tally.

The number of deaths from COVID-19 in the DoD had its biggest single day jump overnight, going from 8 on Thursday to 13 total deaths on Friday.

The Pentagon is considering using a stop-loss order to maintain troop levels during the COVID-19 pandemic. In other words, some troops are going to be full of hate and discontent as they serve past their contract date, should DoD implement it.

Life moves pretty fast. One day you're on a plane heading to Guam to berate thousands of already demoralized sailors. The next day, you're writing a resignation letter and wondering how the hell it all went wrong.

Such was the case for Acting Secretary of the Navy Thomas Modly, who resigned on Tuesday after less than five months on the job.

Acting Secretary of the Navy Thomas Modly still has a job, although that fact may change in the coming days as the fallout over his speech to sailors in Guam continues and more lawmakers call for his ouster.

.@CDCDirector Redfield tells KVOI am Tucson that since most people in US are currently staying home and social/physical distancing, the US death toll due to the novel coronavirus could be "much lower" than the number of deaths models previously have projected.

The Pentagon on Sunday ordered the wear of face masks on DoD property in a memo written by Defense Secretary Mark Esper. The move comes weeks after Esper said he could not “put out a blanket policy” across the services in response to COVID-19.

The fallout for the Navy over the relief of Capt. Crozier from command of the USS Theodore Roosevelt continues, and bottom line up front, it has gotten much worse.

The letter from the captain of the USS Theodore Roosevelt may have potentially saved thousands of sailors from being exposed to COVID-19, but it's clear Navy leadership was angry that the letter leaked to the media.

Acting Secretary of the Navy Thomas Modly announced on Thursday he was relieving the captain, Brett Crozier, whom he accused of creating a panic aboard the ship with his letter. The accusation of sailors being panicked was undercut by a video taken from the Roosevelt that found its way online today, in which thousands of sailors gave their ousted commander a heroic send-off as he left the ship, shouting “Captain Crozier! Captain Crozier!”

The letter from the captain of the USS Theodore Roosevelt seemed to have worked. About one-fifth of the crew, or about 1,000 sailors, of the ship were evacuated from the ship and placed in quarantine on Guam days after the skipper sent a letter to Navy leadership practically begging to get his sailors off the ship, where social distancing is impossible.

Defense Secretary Mark Esper said Tuesday that he had not read the four-page letter written by the captain of the USS Theodore Roosevelt that has rippled across the media and the services, a particularly tone deaf response given the gravity of the letter and what the captain is dealing with: hundreds of sailors infected and the virus continuing to spread throughout the ship.

When asked about the letter on Wednesday by my colleague Jeff Schogol, Esper's spokesman said the secretary “has read the letter and discussed it with Navy leadership to ensure they are addressing the concerns raised in the letter.”

The numbers, unfortunately, keep going up. Cases in the United States now stand at 164,785 with 3,173 deaths, according to Johns Hopkins University, and we've reached a grim milestone: More people have died in the United States from COVID-19 than in the Sept. 11th terrorist attacks.

The military is also bearing the brunt of the pandemic, with cases continuing to rise within the ranks.

Cases of novel coronavirus (COVID-19) continued to rise in the United States over the weekend to 143,532 confirmed cases and 2,572 deaths. Nearly 60,000 cases are in New York, though all 50 states and territories are affected.

Today we're starting a live blog of updates on how the U.S. military is responding to the novel coronavirus pandemic that continues to spread throughout the world. Keep this page bookmarked, since we will continue to provide updates with the latest information on how the virus is spreading, how military members are being affected, and how you and your family can protect yourself.

Now, here's what we're seeing at the moment: