A second aircraft carrier is reportedly facing a COVID-19 outbreak

The USS Theodore Roosevelt isn't the only Navy aircraft carrier in the Western Pacific that's currently dealing the threat of the novel coronavirus (COVID-19) among its sailors. 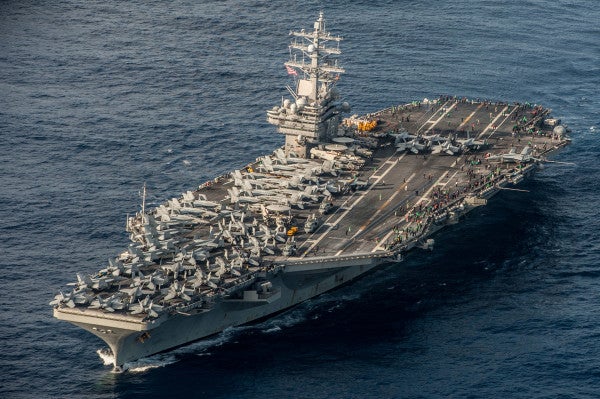 The USS Theodore Roosevelt isn't the only Navy aircraft carrier in the Western Pacific that's currently dealing the threat of the novel coronavirus (COVID-19) among its sailors.

Details in the Fox News report are limited, and while Task & Purpose was unable to independently confirm those cases, the report comes amid news of a potential COVID-19 outbreak at Yokosuka Naval base

On Thursday, the Navy announced that a U.S. service member assigned to Commander Fleet Activities Yokosuka, where the Reagan is permanently forward deployed, had tested positive for COVID-19.

On Friday evening, Officials at Yokosuka Naval Base announced that two additional sailors assigned to CFAY had tested positive for COVID-19, prompting a 48-hour lockdown for service members base residents, per Stars and Stripes.

Those new cases “have no known connection to the first positive result,” according to Yokosuka commander Capt. Rich Jarrett.

“With the unknown origins of these new cases, we need to take some immediate conservative actions to protect the health of our community until the nature of the public health threat can be characterized,” Jarrett said in a statement.

As of Saturday evening, the Navy reported that a total of 134 service members who had tested positive for COVID-19, although the service will no longer name the specific vessels infected sailors are stationed on.

While the extent of the spread of COVID-19 across the Navy's Japan-based sailors remains unclear, the Reagan presents a unique challenge to the Navy where close quarters, communal living, and constant activity make social distancing to prevent transmission a near impossibility.

Indeed, reports of an outbreak aboard the Reagan comes as the Navy has sidelined the USS Theodore Roosevelt in Guam to test each of its nearly 5,000 sailors for the illness amid reports of dozens of fresh cases aboard the aircraft carrier.

While Acting Navy Secretary Thomas Modly stressed that the Roosevelt in particular was “operationally capable if called upon to do so,” it's unclear if the Reagan, currently undergoing maintenance at Yokosuka anyway, might face a similar impact on readiness as the service works to halt the spread of COVID-19 in the ranks.

Sidelining two aircraft carriers in the span of a few weeks would prove a major blow for the Navy's carrier force, which has suffered from worrying deployment gaps in recent years, especially given the Pentagon's ongoing focus on countering China in the Pacific.

“I gave the fleet guidance and said, we have to do three things,” Pacific Fleet commander Adm. John Aquilino told USNI News on Wednesday. “The first is to ensure the health of our sailors and their families. The second is to ensure that we don’t spread this disease either to the homeland or to our allies and partners. And then the third is that we ensure we maintain our warfighting readiness.”