COVID-19 has taken an entire aircraft carrier out of commission

The announcement comes days after Acting Navy Secretary Thomas Modly said three sailors aboard the carrier were diagnosed with the virus and flown from the ship. 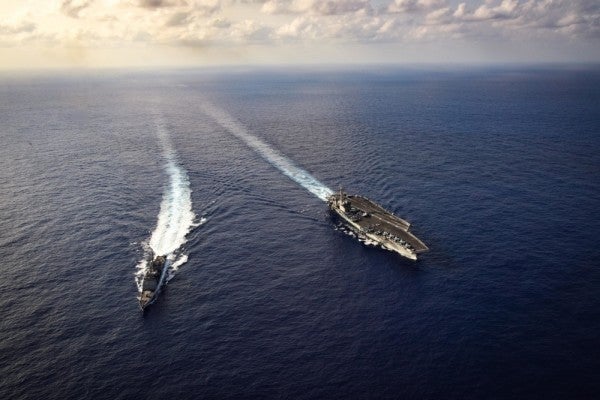 Editor's note: This story has been updated with a statement from Chief of Naval Operations, Adm. Mike Gilday.

The aircraft carrier USS Theodore Roosevelt will be pulling into Guam so that each of its nearly 5,000 sailors can be tested for COVID-19, the Navy announced on Thursday.

The announcement comes days after Acting Navy Secretary Thomas Modly said three sailors aboard the carrier were diagnosed with the virus and flown from the ship.

News reports since then showed the number had increased to at least 23 and that the “number is changing.”

The crew of the Roosevelt will remain pierside as the testing is carried out, Modly told reporters in a news conference on Thursday.

Though Modly did not say how long the tests would take, he emphasized that the ship “is operationally capable and can do its mission if required to do so.”

Chief of Naval Operations Adm. Mike Gilday said in a statement on Thursday afternoon that the Roosevelt's medical crew is working as fast as possible to complete the testing.

“Immediate priority will be symptomatic Sailors, those in close contact with Sailors who have tested positive already, and essential watch standers,” said Gilday, who added that sailors who test positive will be isolated. “Deep cleaning of the ship's spaces is also ongoing.”

Gilday said the Roosevelt had already planned on going to Guam for a previously-scheduled port visit. Still, it's unclear how long it will take to test all of the sailors, and how many of them will have to be isolated for testing positive.

The sidelining is a dramatic blow to the Navy, which has struggled with aircraft carrier deployment gaps over the past decade.

On March 20, the Navy announced it would be operating two carriers in the Middle East to put pressure on Iran, but some leaders within the service say that double deployment is unsustainable as it strains the branch’s ability to deploy carriers to check China and Russia.

“The carrier schedules are going to be such that they may not be able to make, or take full advantage of, their maintenance periods,” said Bryan Clark, a former senior aide to the chief of naval operations and now a senior fellow at the Hudson Institute, in a March 24 Defense News article. “And then you’re going to see the kind of cascading effects on carrier readiness that will take years to dig out of.”

“Really it has only been in the last nine months that the Navy has managed to shake the lasting effects of that readiness troth” of the early-2010s double-carrier deployment to the Middle East, Clark said.

The 9th Carrier Strike Group public affairs office did not immediately respond to a request for comment on how the Roosevelt COVID_19 testing would affect carrier operations and rotations.

The Theodore Roosevelt Carrier Strike Group departed San Diego for a scheduled Indo-Pacific deployment on Jan. 17, the Navy said. Its last port visit was in Da Nang, Vietnam on March 5, to commemorate 25 years of U.S.-Vietnam diplomatic relations the Navy said.

In the meantime, Modly had some good news to offer reporters: the sailors infected with COVID-19 who had been flown off the ship “are currently doing fine,” and are in quarantine on Guam, he said.

“Their symptoms are very mild … there are aches and pains, those sorts of things, sore throats, but nothing that required hospitalization,” he said.