The crews of Harry S. Truman Carrier Strike Group will have to wait a while longer before they get back to port, the Navy announced on Monday. 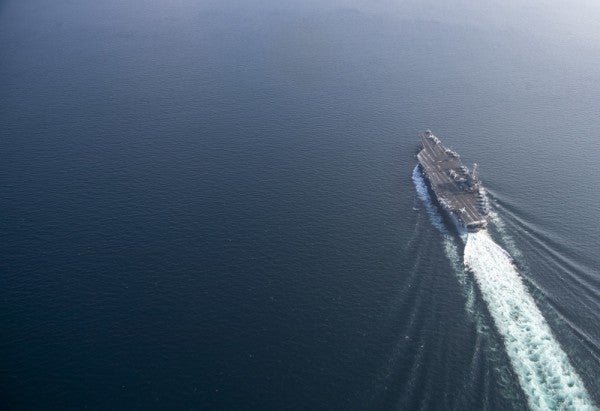 The crews of the Harry S. Truman Carrier Strike Group will have to wait a while longer before they get back to port: the Navy announced on Monday that the group would remain at sea in the western Atlantic in order to protect the crew from exposure to the novel coronavirus (COVID-19).

The extension comes on the heels of a deployment to the U.S. 5th and 6th Fleet areas of operation, wrote U.S. 2nd Fleet Public Affairs in a press release.

U.S. Naval Institute News reported that the Truman CSG is now the only on-call carrier strike group on the East Coast.

As a result, it must “maintain a high level of readiness for a potential rapid surge or forward deployment,” as the Navy put in its release.

The Navy “will continue to evaluate this dynamic situation and will provide an update to the crew and their families in approximately three weeks,” according to the release.

“After completing a successful deployment we would love nothing more than to be reunited with our friends and families,” said Rear Admiral Andrew Loiselle, commander of Carrier Strike Group 8.

“We recognize that these are unique circumstances and the responsible thing to do is to ensure we are able to answer our nation’s call while ensuring the health and safety of our Sailors.” he added. “We thank you for your continued love and support as we remain focused on this important mission.”

“We need to protect our most valuable asset, our people, by keeping the ship out to sea,” said Vice Adm. Andrew Lewis, commander U.S. 2nd Fleet.

The Truman CSG has been at sea since September, and has spent much of its deployment in the North Arabian Sea as a check on Iran, USNI News reported.

The same day as the Truman CSG extension, the Navy announced that a sailor assigned to the USS Theodore Roosevelt had died of complications related to coronavirus. The carrier is currently docked at Guam, where its sailors are undergoing quarantine on the island.

The sailor had been admitted to the intensive care unit on Guam on Thursday after testing positive for the virus.

As of Sunday, the Roosevelt had 585 positive COVID-19 cases among its crew, according to the latest data released by the Navy.

The news comes on the heels of a more than a week of tumult for the Roosevelt, which saw its commanding officer, Capt. Brett Crozier, relieved for criticizing Navy leadership in a leaked memo for its handling of coronavirus, the evacuation of hundreds of sailors into quarantine in Guam, and the resignation of Acting Navy Secretary Thomas Modly after he flew out to Guam to lambast Crozier in front of Roosevelt sailors.