Yet another aircraft carrier has reported a positive COVID-19 case

At least two sailors assigned to the USS Nimitz has tested positive for the novel coronavirus (COVID-19) in the last week, Politico reports, the Navy's fourth aircraft carrier to report a positive case of the virus among its crew 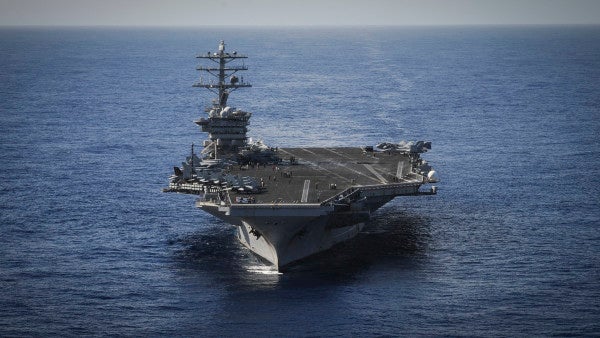 At least two sailors assigned to the USS Nimitz has tested positive for the novel coronavirus (COVID-19) in the last week, Politico reports.

The first crew member tested positive for COVID-19 “after experiencing symptoms while on board the ship,” Politico reports, prompting the crew to prepare “an onboard quarantine of sorts to both reduce sailors’ exposure and more easily monitor them for symptoms.”

“The individual displayed symptoms and was put into isolation, subsequent tests were inconclusive,” a defense official confirmed to Task & Purpose. “Because of said symptoms, the Navy treated the individual as a positive case out of an abundance of caution.”

A second Nimitz crew member who reportedly tested positive for COVID-19 “has not been aboard the ship,” according to Politico.

The news makes the Nimitz the Navy's fourth aircraft carrier to report a positive case of the virus among its crew.

The USS Theodore Roosevelt was previously sidelined in Guam on March 23 due to the rapid spread of the disease aboard the aircraft carrier, an outbreak that prompted Capt. Brett Crozier to plead with his superiors for help in an official letter that subsequently leaked to the media

The leak of Crozier's letter sparked a chain of events that culminated Tuesday with the resignation of Acting Navy Secretary Thomas Moldy after he lambasted Crozier in a fiery speech to the Roosevelt crew on April 5.

After the Roosevelt was sidelined, Fox News reported, citing U.S. officials, that the USS Ronald Reagan aircraft carrier in Yokosuka, Japan had two sailors on board who have tested positive for COVID-19.

A sailor stationed aboard the USS Carl Vinson at Puget Sound Naval Shipyard in Washington state also tested positive for COVID-19 around the same time as the Roosevelt outbreak, according to the Kitsap Sun.

As Task & Purpose previously noted, aircraft carriers present a unique challenge to mitigating the spread of COVID-19 among their crews, as close quarters, communal living, and constant activity make social distancing a near impossibility.

As of Tuesday, the Navy had positive COVID-19 diagnoses for 479 sailors, 93 civilians, and 38 contractors, according to the latest data from the service. Two contractors have died of the virus.