Thousands of sailors serve aboard aircraft carriers. What happens if one gets sick with the coronavirus? 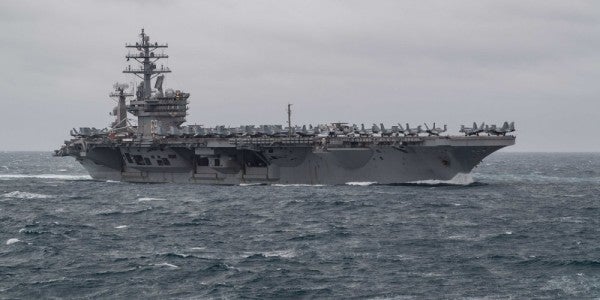 Roughly 2,500 people aboard the cruise ship Grand Princess are currently confined to their cabins after a former passenger died of the coronavirus and several current passengers and crew members showed symptoms of the disease, according to the Los Angeles Times.

That got your friend and humble narrator thinking: How would the Navy react if a sailor aboard a large ship such as an aircraft carrier tested positive for the coronavirus? (This Pentagon reporter is old enough to remember the 1988 series “Supercarrier,” which dealt with just such a scenario.)

It is common for sailors to come down with a “crud” during deployments. These outbreaks tend to spread through vessels at the start of deployments, before sailors’ immune systems get used to all the bugs going around.

Some cruds are worse than others. The dock landing ship USS Fort McHenry was quarantined at sea for 112 days after nearly 30 service members aboard the ship were diagnosed with parotitis, a viral infection which has symptoms similar to the mumps.

“While symptomatic, affected service members were quarantined and treated in the ship's medical facilities and the affected living and work spaces thoroughly cleaned and disinfected,” Navy spokeswoman Lt. Christina Sears said in March 2019.

Due to the current coronavirus outbreak, Navy ships operating in the Pacific and around Europe and Africa must spend at least 14 days at sea before making port calls.

Navy officials did not provide a comment for this story. So far, one sailor based in Naples, Italy, has tested positive for coronavirus.

While a coronavirus outbreak aboard an aircraft carrier remains a hypothetical scenario, the Navy dealt with a similar situation in 2009 when several sailors aboard the USS Nimitz came down with the swine flu virus.

A retired Navy officer who served on the Nimitz at the time said the outbreak was contained in part by isolating the sick crew members in the ship’s medical department.

Healthy sailors were encouraged to wash their hands frequently, use hand sanitizer, and be careful about what they touched, said the retired officer, who spoke on condition of anonymity because he was not authorized to discuss the matter publicly.

Ultimately, only a small number of sailors became sick and the ship was able to continue taking part in operations, the officer said.

The question of how the Navy would contain a coronavirus outbreak aboard an aircraft carrier is part of a much larger issue facing the Defense Department. U.S. service members are constantly in motion, whether they are deploying, changing stations, or going on leave. One service member infected with coronavirus has the potential to spread the disease far and wide.

Defense Secretary Mark Esper has said he expects to receive a proposal next week about how military installations should respond if a service member tests positive for coronavirus or shows symptoms.

“Some of the things that we’re considering have already been already proven out in U.S. Forces Korea,” Esper said at a Pentagon news conference on Thursday. “Simple things like having teams wipe down door knobs and coffee machines and stuff like that to prevent the spread. Changing social interactions – contact, if you will.”

One thing is certain: The service member who has been hoarding hand sanitizer is about to become everybody's best friend.