WASHINGTON (Reuters) – U.S. Defense Secretary Mark Esper said on Tuesday it was not time to evacuate a U.S. aircraft... 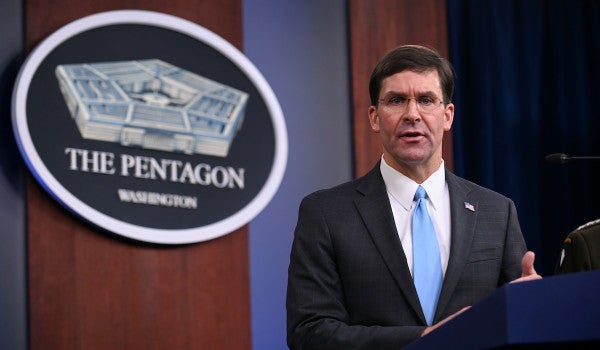 WASHINGTON (Reuters) – U.S. Defense Secretary Mark Esper said on Tuesday it was not time to evacuate a U.S. aircraft carrier reeling from an outbreak of coronavirus, adding that he had not read in detail a letter from the commander of the ship pleading for help.

Reuters reported earlier on Tuesday about a letter from Captain Brett Crozier, the commanding officer of the Theodore Roosevelt, calling for removing over 4,000 sailors from the ship and isolating them.

At least 100 sailors on the carrier have reportedly tested positive for the coronavirus. The ship is currently at port in Guam.

“We are not at war. Sailors do not need to die. If we do not act now, we are failing to properly take care of our most trusted asset — our Sailors,” Navy Capt. Brett E. Crozier wrote in the letter.

The Roosevelt could respond and fight both the enemy and COVID-19 if war were to break out, but right now, Crozier added, the Navy “cannot allow a single sailor to perish as a result of this pandemic unnecessarily.”

“Removing the majority of personnel from a deployed U.S. nuclear aircraft carrier and isolating them for two weeks may seem like an extraordinary measure. This is a necessary risk.”

“It will enable the carrier and air wing to get back underway as quickly as possible while ensuring the health and safety of our sailors,” he added. “Keeping over 4,000 young men and women aboard the TR is an unnecessary risk and breaks faith with those sailors entrusted to our care.”

In his interview with CBS News, Esper did not comment directly on Crozier's proposal, at least in the portions that aired. Asked if it was time to evacuate the carrier, Esper said: “I don't think we're at that point.”

“We're moving a lot of supplies and assistance, medical assistance, out to the carrier in Guam. We're providing additional medical personnel as they need it,” Esper said, adding the goal was still to contain the virus and that none of the crew were seriously ill.