“Modly’s remarks to the crew show that he is in no way fit to lead our Navy through this trying time," wrote Rep. Elaine Luria. "Secretary Esper should immediately fire him" 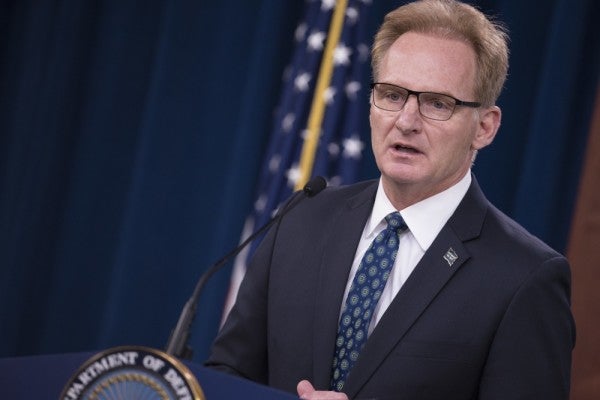 Multiple lawmakers called for Acting Navy Secretary Thomas Modly to resign or be fired after a massive backlash to Modly’s decision to relieve Capt. Brett Crozier, commander of the aircraft carrier USS Theodore Roosevelt, after the latter urged his superiors to evacuate the ship for fear of novel coronavirus (COVID-19) spreading throughout his crew.

Lawmakers levied their calls against Modly on Monday after Task & Purpose published leaked audio of the service's top civilian using a speech to Roosevelt sailors regarding Crozier's departure to lash out at the captain over the leak of his now-infamous letter to his superiors.

“If he didn't think, in my opinion, that this information wasn't going to get out into the public, in this day and information age that we live in, then he was either A, too naive, or too stupid to be a commanding officer of a ship like this,” Modly told the Roosevelt’s crew over the ship's intercom on April 5, adding that sailors should stop complaining about his departure and do their jobs.

The leaked audio and transcript of speech prompted lawmakers, already on edge over the abrupt removal of Crozier from the helm of the Roosevelt, to demand Modly resign or be removed from his position by Secretary of Defense Mark Esper.

Roosevelt sailors “are on the frontlines of this pandemic and of our nation’s defense in the Pacific,” Luria said in a statement. “Acting Secretary of the Navy Thomas Modly’s remarks to the crew show that he is in no way fit to lead our Navy through this trying time. Secretary Esper should immediately fire him.”

Rep. Justin Amash (I-Mich.) joined in the condemnation of Modly. “The acting Navy Secretary is unfit for office,” he tweeted on Monday. “He should resign or be removed immediately.”

Other lawmakers who called for the secretary’s resignation included Sen. Tim Kaine (D-Va.), who tweeted that Modly’s comments were “completely inappropriate.”

“The only ‘betrayal’ I see here is by @SECNAV Modly, who doesn’t seem to understand the first principles of leadership,” tweeted Rep. Seth Moulton (D-Mass.) on Monday.

“This is not a way to reestablish trust and confidence with your sailors,” tweeted Rep. Ruben Gallego (D-Ariz.) “@secnav has basically neutered himself.”

“Acting Navy Secretary Modly’s rant to the sailors aboard the USS Roosevelt demonstrates he is not fit to lead the Navy,” she tweeted on Monday. “@EsperDoD should remove him immediately.”

As of 3 p.m. on Monday afternoon, no Republican lawmakers had called for Modly’s resignation.