Esper: The ‘safest place to be’ during the COVID-19 pandemic is on a Navy ship at sea

'The statistics show that the safest place to be is on a deployed Navy ship as compared to one that’s in port.' 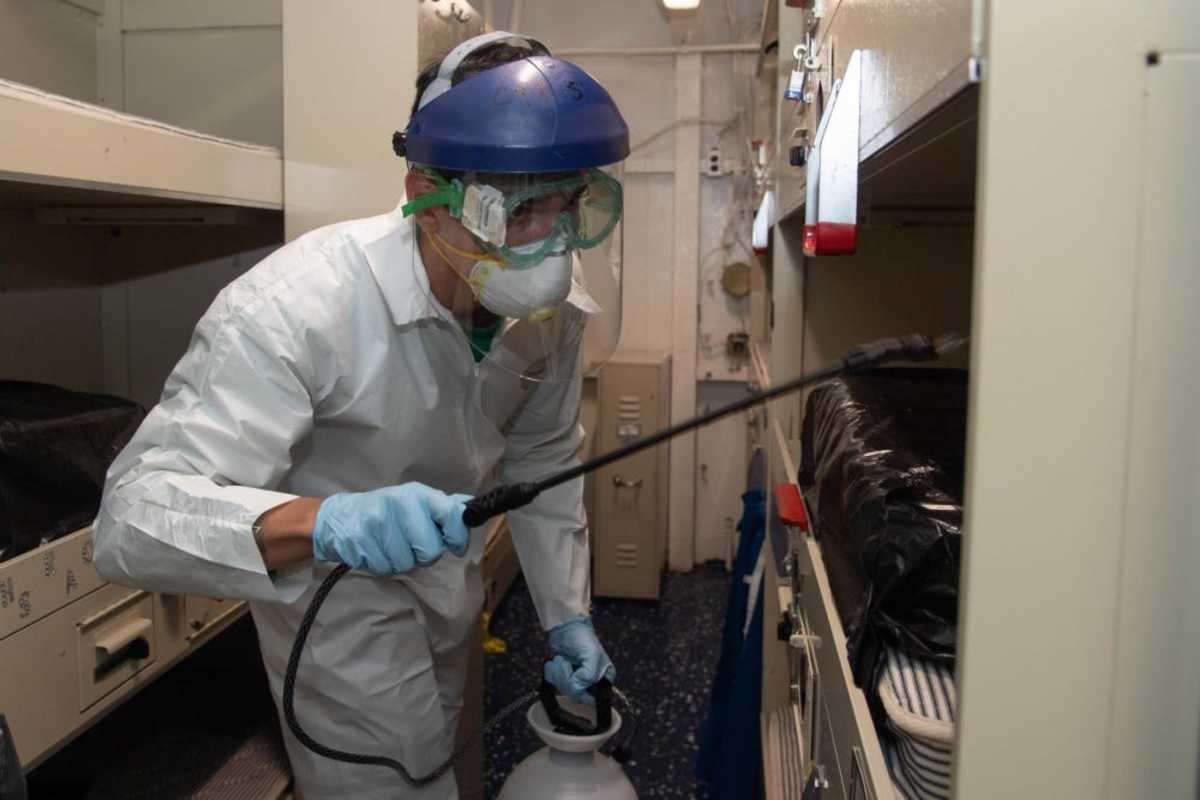 The novel coronavirus (COVID-19) pandemic has revealed just how quickly a disease can disable warships, including an aircraft carrier, but Defense Secretary Mark Esper has claimed that sailors at sea are less likely to get the disease than those ashore.

“The statistics show that the safest place to be is on a deployed Navy ship as compared to one that’s in port,” Esper said during a Monday webinar with the liberal Brookings Institution think tank. “So, of the 90+ ships we have at sea, we only have two that have been affected.”

Those two ships are the aircraft carrier USS Theodore Roosevelt and the destroyer USS Kidd, said Esper, who added that the coronavirus may have come aboard the Kidd during a counter-drug operation.

However, both the Theodore Roosevelt and the Kidd had to pull into port after the coronavirus overwhelmed the crew.

At last count, 1,102 sailors aboard the Theodore Roosevelt and 78 sailors on the Kidd had tested positive for the coronavirus, but the Navy has not provided daily updates on the numbers of sickened crew members for both ships since April 30.

“We believe that we have moved past a point where the daily updates are providing useful information for a public conversation about it,” Pentagon spokesman Jonathan Hoffman told reporters at a May 1 Pentagon news conference.

The Navy is currently investigating the coronavirus outbreak aboard the Theodore Roosevelt. The ship’s former commanding officer Capt. Brett Crozier was fired on April 2, shortly after the San Francisco Chronicle published a leaked copy of his memo to U.S. Pacific Fleet’s leadership warning that sailors would die unless most of the aircraft carrier’s crew were placed into individual quarantine ashore.

Former Navy Secretary Thomas Modly resigned after making an April 5 speech aboard the Theodore Roosevelt in which he insulted Crozier and warned the ship’s crew, “You are under no obligation to like your job, only to do it.”

The coronavirus outbreak aboard the Theodore Roosevelt has shown that asymptomatic service members spread the disease at a very high rate, Esper said on Monday.

Now sailors are tested and quarantined for two weeks before heading to sea, he said.

“We have had ships that are portside that have had sailors infected, but that’s not unlike what you might see at an Army base or an Air Force base where you have sailors out in a community who may get infected by the virus,” Esper said. “But again, before they go out to sea; we bring them in; we test; we quarantine; and we make adjustments to make sure our ships get out on time.”

Indeed, the Navy is not allowing the aircraft carrier USS Harry S. Truman to make a port call on the East Coast to avoid the possibility that a member of the crew may become infected with the coronavirus while ashore and spread the disease to the rest of the crew.

Separately, the aircraft carrier USS Nimitz was able to get underway several weeks after one of its crew members tested positive for the coronavirus while not aboard the ship, according to the Navy. The entire crew was tested and placed into isolation as a precaution.