Everything is normal despite Iranian, Russian, Chinese, and North Korean provocations amid COVID-19 pandemic, top US military officials say

As the U.S. military continues to battle the spread of the novel coronavirus (COVID-19) within the ranks, America's adversaries appear poised to take advantage of the tumult 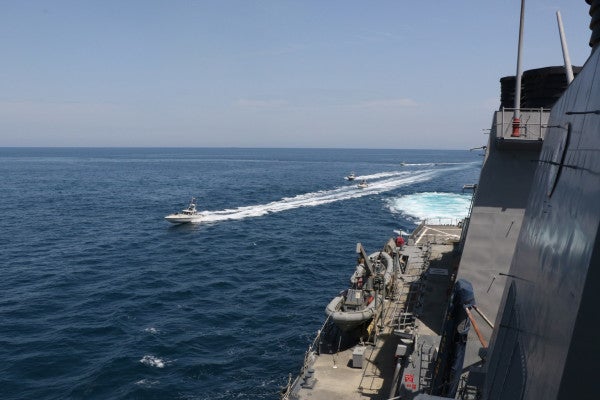 As the U.S. military continues to battle the spread of the novel coronavirus (COVID-19) within the ranks, America's adversaries appear poised to take advantage of the tumult.

On Tuesday, North Korea launched multiple short-range anti-ship cruise missiles into the sea and fired air-to-surface missiles from it's Sukhoi jets, the latest display of force to come out of the country's ongoing military exercises.

The next day, a flotilla of 11 small boats with the Islamic Revolutionary Guards Corps Navy “repeatedly conducted dangerous and harassing approaches” of several U.S. Navy and Coast Guard vessels in the Persian Gulf, a return to the fleet's history of bedeviling U.S. vessels in the region.

That same day, a Russian SU-35 fighter jet intercepted a U.S. Navy P-8A Poseidon aircraft flying over the over the Mediterranean Sea in a decidedly unsafe encounter that saw the Russian jet conduct a “high-speed, inverted maneuver, 25 [feet] directly in front of the mission aircraft,” the Navy said.

All of these came as the Chinese People's Liberation Army resumed large-scale military drills as a show of force in the Pacific, exercises that saw a flotilla, led by Liaoning aircraft carrier, sail through the Miyako Strait near Taiwan.

“In the future, the Chinese navy will continue to organize similar training schedules to accelerate and improve the combat capability of its aircraft carrier strike groups,” PLAN spokesman Gao Xiucheng reportedly said.

All of these provocations in the span of several days might alarm some geopolitical observers. But for Defense Secretary Mark Esper, it's just another week on the job.

“This is a normal week for DoD,” Esper said during an appearance on on NBC's TODAY with Savannah Guthrie. “This is why I said that we must maintain our national mission capabilities — our readiness, our ability to protect the United States — because our adversaries are not standing down.”

Esper's comments come amid major concerns over the U.S. military's readiness stemming from the COVID-19 outbreak aboard the USS Theodore Roosevelt aircraft carrier, which saw the carrier sidelined in Guam amid broad testing and ship-wide disinfecting efforts.

Nearly 600 sailors aboard the Roosevelt are currently COVID-19 positive, according to the latest data released by the Navy. One crew member has died from complications related to the disease.

“You know, we have over 90 Navy ships at sea. All are in good health. All are performing their important wartime missions,” Esper said of the Navy. “And we’re taking other actions to ensure, to make sure that we, again, can continue to defend the American people.”

“I’ve looked at footage, I’ve studied the intent and my conclusion at this point is that it was probably something that was more along the lines of unprofessional as opposed to deliberate,” Wolters said.

“We have an investigation that’s ongoing. We do that in every case,” he added. “And our U.S. mission in Moscow has obviously already initiated a conversation with the powers to be in Moscow to make sure that they’re very, very aware of our dissatisfaction with the event.”