The Navy is facing yet another COVID-19 outbreak aboard a warship after "several" crew members from the dock landing ship Carter Hall tested positive for the virus last month, Navy Times reports 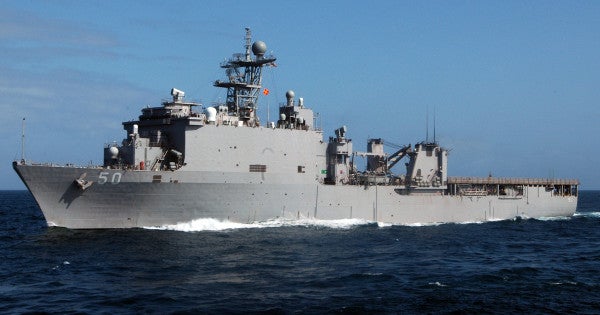 The Navy is facing yet another COVID-19 outbreak aboard a warship after “several” crew members from the dock landing ship Carter Hall tested positive for the virus last month, Navy Times reports.

The Virginia-based Harpers Ferry-class landing ship was in port and “continuing preparations to be a standby surge force during the hurricane season” when the positive results came in on May 23, according to Navy Times.

“The crew entered a precautionary quarantine after receiving the test,” Navy spokeswoman Lt. Cmdr. Amelia Umayam told Navy Times. “A portion of the crew remains on board the ship to clean and maintain in port watchstanding requirements.”

Navy officials declined to elaborate on how many Carter Hall crew members have currently tested positive for the virus.

The outbreak aboard the Theodore Roosevelt in particular prompted the carrier's now-ousted commander, Capt. Brett Crozier, to plead with the Navy for additional resources to halt the spread of COVID-19 aboard his vessel, writing in a letter to his superiors that sailors “do not need to die.”

Crozier's letter to Navy leaders, which was subsequently leaked to the San Francisco Chronicle, sparked a chain of events that culminated in the resignation of Acting Navy Secretary Thomas Modly on April 7 over his handling of Crozier's dismissal.

The Navy had previously announced in late April that sailors aboard 26 warships had contracted COVID-19 while personnel aboard an additional 14 vessels had recovered from the illness.

Beyond the Roosevelt and the Kidd, none of the affected vessels were at sea, a statistic that prompted Secretary of Defense Mark Esper to boast at the time that only two outbreaks among the 90 vessels currently under way constitutes “a pretty good record.”

“The statistics show that the safest place to be is on a deployed Navy ship as compared to one that’s in port,” Esper said.

But as Task & Purpose previously reported, an April 30 report from the Defense Health Agency contradicts Esper's assessment, noting that DoD shipboard populations “are at increased risk of COVID-19” whether they're in port or not due to close quarters and cramped workspaces.

Indeed, the Pentagon's Office of the Inspector General in mid-May announced an investigation “to determine whether the Navy has implemented policies and procedures to prevent and mitigate the spread of infectious diseases, such as coronavirus-disease-2019 (COVID-19), on ships and submarines.”

As of June 1, 2,477 sailors had tested positive for COVID-19, according to the latest Navy data. Roughly 1,645 of those infected have since recovered.