Two sailors have been medically evacuated back to the United States. 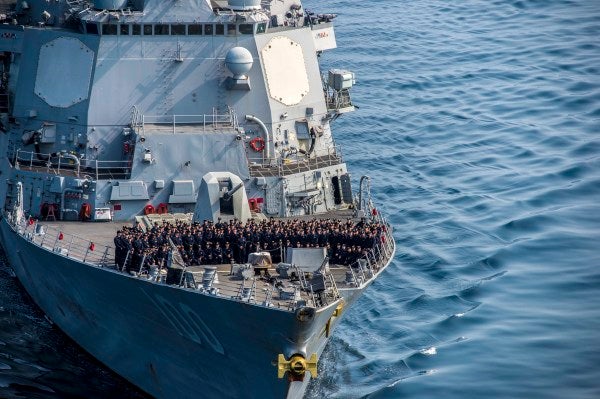 The number of sailors testing positive for the novel coronavirus (COVID-19) onboard the Navy warship USS Kidd nearly doubled overnight, according to an update released by the service on Saturday.

The Kidd (DDG-100), a destroyed currently deployed to the Pacific now on its way back to port, reported that 33 of its sailors have tested positive for the disease, up from 17 on Friday.

Two sailors have been medically evacuated back to the United States, the Navy said.

Though at least two dozen other ships have confirmed cases, this is the second major outbreak on a Navy warship while at sea; the first, the USS Theodore Roosevelt has been stuck in port in Guam since late March. Nearly 1,000 sailors from the aircraft carrier tested positive for the virus; so far, 112 have recovered.

On the Kidd, sailors are now wearing personal protective equipment and N95 masks, according to the Navy press release, which added that a surgical team outfitted with ventilators and ICU capacity was en route to the ship from the USS Makin Island.

“The first patient transported is already improving and will self-isolate,” Rear Adm. Don Gabrielson, commander U.S. Naval Forces Southern Command, said in a Friday statement. “We are taking every precaution to ensure we identify, isolate, and prevent any further spread onboard the ship. Our medical team continues coordinating with the ship and our focus is the safety and well-being of every sailor.”

Correction: A previous version of this story said the Kidd was heading back to homeport in Everett, Washington. The story has been updated since it is not yet known which port location the Kidd is sailing toward.