Of the 4,800 crew members aboard the aircraft carrier USS Theodore Roosevelt, 1,273 sailors contracted novel coronavirus (COVID-19) since the pandemic began earlier this year 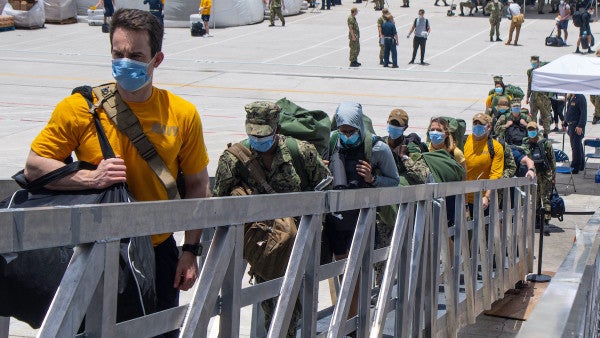 The updated total comes on the heels of a new six-week study of 382 Roosevelt sailors that was conducted by the Navy and the Centers for Disease Control and Prevention and unveiled Tuesday by Navy and civilian public health officials.

Those officials said that the study provides helpful data on the effects of COVID-19 on young people living in close environments, which is a unique population among COVID-19 studies so far.

Here are the highlights of the study:

Navy and CDC officials said the findings are a confirmation of previously-held assumptions about the virus, and they could inform the Navy’s handling of the disease in the future.

“It’s very exciting to see data that supports some of the protective measures the Navy’s been implementing,” said Capt. Robert Hawkins, commander of the Navy and Marine Corps Public Health Center, of the finding that face masks and social distancing helps reduce rates of infections even on board an aircraft carrier.

“It’s helpful to know mitigation measures are working even in this closed-in space,” he said.

Officials said that the findings will also help the Navy screen young people for the disease.

Dr. Daniel Payne, an epidemiologist for CDC, said the most well-known symptoms for COVID-19 are coughing or shortness of breath, and the fact that sickened sailors were 10 times more likely to report mild symptoms such as loss of taste and smell is very helpful, Hawkins said.

“It may indicate that’s a very good tool for screening,” he said.

“I’ve been very impressed that sailors have self-reported that they’ve been infected,” he said. “Some of those individuals minimize the chance that they spread the virus to shipmates.”