The sailor was reportedly caught on security camera footage while leaving his room but was stopped before he could leave the hotel. 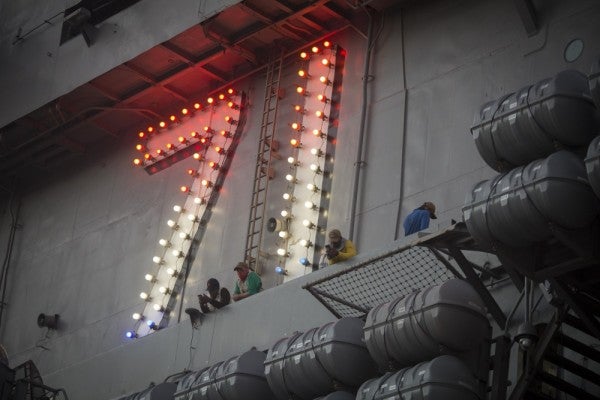 A sailor assigned to the USS Theodore Roosevelt is under investigation for leaving his hotel room while under quarantine for potential exposure to the novel coronavirus (COVID-19) aboard the ship.

The sailor was reportedly caught on security camera footage while leaving his room. A Navy official told Task & Purpose that the sailor tried to sneak into another room but never left the hotel grounds.

The sailor was returned to Naval Base Guam and is now subject to discipline under the Uniformed Code of Military Justice, said Lou Leon Guerrero, the governor of Guam, according to an article in the  Pacific Daily News.

Only sailors who test negative for novel coronavirus (COVID-19) and are asymptomatic will be quarantined in hotels off base, officials said. The military has security in place at the hotels to ensure sailors don’t leave.

“Any sailor who violates that lawful order will be subject to uniform code of military justice,” Menoni said, according to Pacific Daily News. “I have to assure the people of Guam and our local military community I take this deadly seriously. There is nobody that’s going to violate an order on my watch and get away with it.”

The Navy is 94 percent done with testing the entire 4,800-member crew of the USS Theodore Roosevelt, Reuters reported. Roughly 60 percent of the over 600 sailors who tested positive so far have shown no symptoms of COVID-19.

Five crew members have been hospitalized with COVID-19=, Reuters reported. One sailor has died due to complications stemming from the virus.