Navy recruits are being quarantined at Great Wolf Lodge, but water slides are sadly out of the question 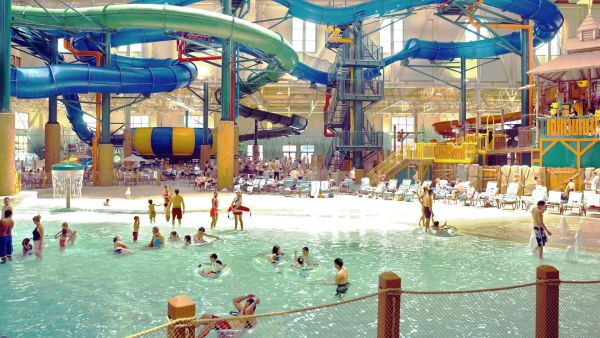 Sailors from the USS Theodore Roosevelt may have spent the last few weeks holed up in a hotel in Guam to avoid the spread of the novel coronavirus (COVID-19), but that's nothing compared to two weeks in quarantine at a water park without any fun.

Stars and Stripes reports that the Navy is currently sequestering about 500 recruits at the Great Wolf Lodge Water Park near Chicago for two weeks before shipping them out to basic training.

The lodging situation, which will cost the Navy around $1.1 million for each weekly batch of recruits, is strictly designed to halt the spread of the virus at Recruit Training Command Great Lakes and not for funsies, according to the Navy.

“By moving the [restriction of movement] to an off-site facility, they are able to provide rooms with a small number of recruits, which will reduce the likelihood of spreading of the illness between recruits, protect the recruits and staff already at [recruit training command], and increase the space available at [recruit training command] for physical distancing procedures,” Chief of Naval Personnel spokesman Cmdr. Dave Hecht told Stars and Stripes.

Indeed, Navy recruits can kiss the prospect of a kicking off their Navy careers with some booze waterslide hijinks goodbye: According to Stars and Stripes, none of the “resort-type” amenities are available to recruits, who are allowed to bring two books and one hand-held gaming device into quarantine while they're focusing on course work and training.

Recruit Training Command Great Lakes had previously delayed accepting new recruits for a week after one recruit tested positive for COVID-19 in late March, a delay the service extended in April as personnel made arrangements to slow the spread of the virus as the service's lone boot camp.

On the downside, being quarantined at a water park is a frustratingly tempting scenario on par with a modern day trial of Tantalus, the Greek mythological figure who was doomed to have bodies of water recede at his feet, leaving him thirsty for all eternity.

On the upside, water parks are objectively filthy — which is actually a downside when you consider that the Great Wolf Lodge Water Park that's housing these recruits is probably a more dangerous cesspool of disease than, say, taking a walk through the streets of New York right now.

So enjoy your stay, recruits, and remember: resist the urge to yell “Cannonball!” should you happen to walk by the pool.