"Additional measures and actions are required to protect the force from further spread of COVID-19.” 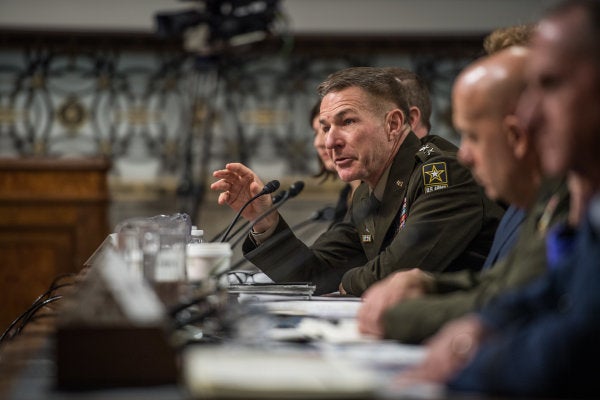 Short by more than $891 million to combat the coronavirus outbreak threatening the U.S. public health system, senior leaders of the U.S. Army are locked in debate over whether they should continue military exercises and mass troop formations despite its own intelligence estimates which indicate that efforts to stop the rapidly-spreading disease have failed.

On Monday afternoon Army Secretary Ryan McCarthy and Gen. James C. McConville, the Army’s top-ranking officer, joined other military generals and enlisted soldiers of various stars and chevrons to receive an update on the novel coronavirus, or COVID-19, via secure video teleconference. The meeting came a day after the Pentagon announced its first death from coronavirus complications.

U.S. Army sources briefed on the discussions told Task & Purpose that among the top brass, there are voices which have advocated for a pause in all nonessential training in favor of maintaining health within the rank-and-file of the U.S. Army. Some of the top commanders have warned that if drastic measures are not implemented soon, the Army will face a serious degradation of health as more and more soldiers become infected.

That morning, a message from the Department of the Army at the Pentagon sent out a message to all U.S. Army commands. The message contained no ambiguity, just curt honesty: “Mitigation measures taken by the U.S. Army to blunt the spread of COVID-19 have proven insufficient. COVID-19 continues to spread geographically as the number of infected persons continues to rise,” according to a document marked unclassified that was obtained by Task & Purpose.

The message added: “Civilian capability and capacity are becoming more stressed as dense population centers continue to report higher rates of infection that are impacting major transportation hubs and supply chains. Additional measures and actions are required to protect the force from further spread of COVID-19.”

On Wednesday, the U.S. Army ordered every base commander in the United States and abroad to raise its health protection posture to “Health Protection Condition Charlie,” meaning the threat of coronavirus is substantial. Rapid response forces were ordered to go into Health Protection Condition Delta — the highest level — which indicates a severe threat of coronavirus, according to the same document obtained by Task & Purpose. Officials indicated that the measures were to safeguard strategic readiness and preserve the capabilities of units able to respond quickly to situations around the globe.

Despite the blunt assessment and the continued spread of the virus, which has now affected hundreds of service members, family members, and DoD civilians, soldiers in the United States and overseas continue to head to the field for training per the orders of their commanders. Although Defense Secretary Mark Esper cautioned troops from holding mass troop formations and urged them to follow guidelines laid out from the Centers for Disease Control and Prevention, he said at a virtual town hall streamed to Facebook Live on Tuesday: “We have a mission and that is to maintain that mission and mission readiness and that includes physical fitness.”

Chief Master Sgt. Ramón Colón-López, the senior enlisted advisor to Gen. Mark Milley, the chairman of the Joint Chiefs of Staff said, ““On the subject, we have to revert back to the trust of the chain of command, the people closest to the troops out there in the field. We’re trusting local commanders and medical professionals to provide information and take the prudent steps to make sure they contain or prevent the spread of the disease, but also we can’t forget there is a mission requirement for a lot of these units.”

Confirmed coronavirus cases among service members surged Wednesday morning from 174 to 224, according to the most recent figures. Confirmed cases among U.S. military employees are up as well, from 59 to 81. The number of military dependents that have contracted the coronavirus increased as well from 61 to 67, according to the latest Pentagon statistics. Contractors for the U.S. military have 40 confirmed cases. In total, the Defense Department has 435 current and recovered cases of the novel coronavirus.

The unclassified financial document obtained by Task & Purpose and briefed to the Army’s top leaders on Monday afternoon found that despite funding more than $100 million to detect, treat and prevent the spread of COVID-19, the Army still lacked more than $891 million in needed funds for current and future sustainment efforts to stem the spread of the disease until the end of the current fiscal year.

Two weeks ago, budget planners for the U.S. Army told senior leaders the total cost estimate would come with a price tag of $955 million to combat the rapidly-spreading virus, according to a similar financial document obtained by this reporter and published in The Daily Beast. In the latest estimate, the total increased by more than $37 million to an overall cost estimate of more than $992 million as of Monday.

The latest financial document obtained through a senior Defense Department official, who provided the document on condition of anonymity, was prepared by the assistant secretary of the Army for financial management and comptroller — an office led by John E. Whitley, a Trump appointee, who serves as the principal adviser to senior Army leadership on financial management.

The total cost estimate covers a wide spectrum of coronavirus response provisions from prevention and detection measures such as public health surveillance and expanded cleaning contracts for biohazard mitigation to providing personal protective equipment to first responders and all U.S. Army active-duty components, including reserve forces and the National Guard.

Among the total cost estimate, some of the biggest line items needed by the Army include bed expansion and personal protective equipment for medical personnel at a cost of more than $83 million. “Disease Response,” which includes vaccines, testing and antiviral development, is estimated at more than $81 million and is a part of an overall U.S. Army Medical Research and Development requirement of more than $215 million for the current fiscal year, according to the document. Personnel costs for Army National Guard troops for amenities such as temporarily lodging comes in at the highest cost at more than $98 million.

Army leaders also want more than $54 million for the Surgeon General of the Army and the U.S. Army Medical Research and Development Command, headquartered out of Fort Detrick in Maryland, to set up around-the-clock operations to monitor the prevention, detection and treatment efforts.

Contacted on Monday, U.S. Army officials did not respond to questions from Task & Purpose before publication.

The White House and Senate leaders brokered a deal early Wednesday on a coronavirus stimulus package worth $2 trillion. While the full text of the bill is not yet known lawmakers originally included $8.3 billion for Defense Department operations.

The defense appropriations embedded in the stimulus package would be allocated to cover the Army’s financial shortfall designed to aid 1.2 million American soldiers and Army employees, including roughly 3 million dependent family members, according to another Army document obtained by Task & Purpose.

Senate Majority Leader Mitch McConnell (R-Ky.) said he expected the Senate to pass the legislation on Wednesday. In a statement released from House Speaker Nancy Pelosi (D-Calif.), she said the stimulus package, “takes us a long way down the road in meeting the needs of the American people.”

Pelosi did not say whether the House would take up the legislation if the Senate passed the bill Wednesday, instead opting to review the provisions, “to determine a course of action.”