No new Navy recruits are expected to arrive at boot camp until April 19. 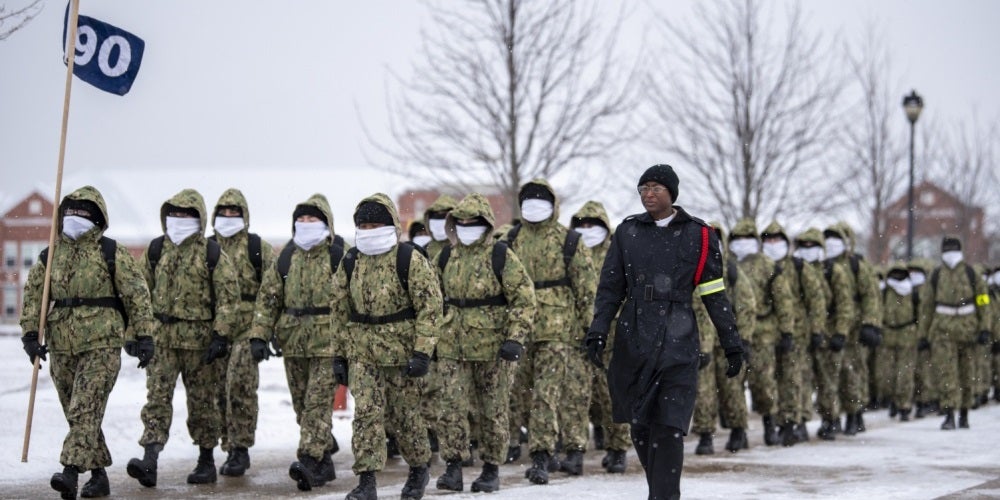 The Navy has delayed shipping new recruits to its boot camp until April 19 to ensure it has taken the appropriate steps to keep recruits, drill instructors, and other personnel safe from the novel coronavirus (COVID-19), service officials said.

On March 30, Cmdr. David Hecht, a spokesman for the Chief of Naval Personnel, told Task & Purpose that the Navy had temporarily paused shipping recruits to Recruit Training Command, Great Lakes, Illinois, for one week after a recruit fell ill with the coronavirus.

The extra time will allow the Navy to put in place its plan to fight COVID-19 at Great Lakes, which includes asking recruits to limit their movements two weeks prior to shipping out and then putting them in quarantine for two weeks at Great Lakes before they begin their training, Hecht said.

Most of the staff at Great Lakes will remain on the installation for at least 30 days to reduce the chance that they could catch COVID-19, he said.

Training has not stopped for those recruits who are already at Great Lakes, but it has been modified to include social distancing, Hecht said.

“There is no [Recruit Training Command]-wide quarantine or suspension of training,” Hecht said.

It was not clear from Hecht’s responses just how effective the social distancing and other measures that have been implemented at Great Lakes have been at slowing the spread of COVID-19.

While the Navy acknowledged in March that one recruit at Great Lakes had tested positive for the disease, officials have not said since then if more recruits or drill instructors have been infected.

Esper has prohibited the military services from providing information about how many service members at any given installation have tested positive for COVID-19.

Navy officials told Task & Purpose on Tuesday that they cannot say how many sailors are infected on specific ships or in specific units, commands, or geographic areas.

As of Monday, a total of 436 sailors, 91 Navy civilians, 51 dependents, and 39 contractors had tested positive for COVID-19, according to figures provided by the service. Two Navy contractors have died from the disease.