“This threat is automatic in the sense that it is a biological entity, so it operates with a ruthlessness and irregularity that is new to everyone." 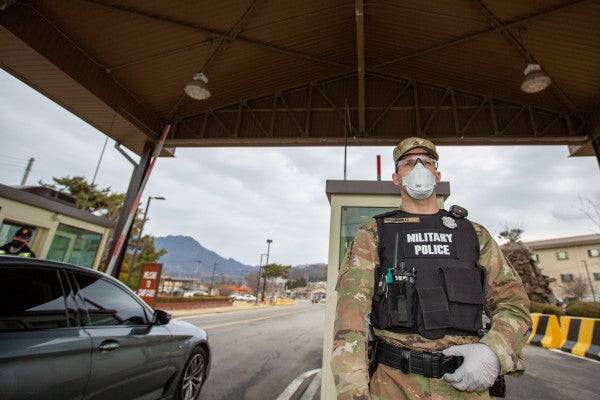 While the Defense Department is working overtime to stay on top of the novel coronavirus (COVID-19) outbreak, senior Army planners are focused on developing an effective response as the virus continues to spread.

“We should not wait for others to make decisions if we know they must be taken now to protect our soldiers, civilians, and families across our installations,” said one document, which consisted of a series of suggested talking points for senior leaders to use while communicating with the rest of the Army.

Together, documents obtained by Task & Purpose lay out the approach to COVID-19 being suggested by Maj. Gen. Brad Gericke — the Army’s director of strategy and operations — and his team, to senior Army leadership.

Though they are pre-decisional — and it’s unclear if Army Secretary Ryan McCarthy and Chief of Staff James McConville have adopted the approach laid out by Gericke and his team — the documents provide a window into how the service’s senior planners are thinking about the global COVID-19 outbreak.

Gericke told Task & Purpose on Tuesday that the pandemic is “the largest scale operation or threat that we’ve seen here in the first half of this 21st century.

“This threat is automatic in the sense that it is a biological entity, so it operates with a ruthlessness and irregularity that is new to everyone,” he said. “Unlike a thinking enemy, which you can intercede in the adversary’s thought process, this adversary persists every minute of every hour or every day to advance itself. So we have to — as a military and as an Army supporting the joint effort — we have to be equally high-speed, equally relentless, equally ruthless, and that’s what we’re trying to do as we line up our capabilities here.”

One of the documents breaks down priorities for the Army Deputy Chief of Staff for Operations, Plans, and Training, G-3/5/7, ranging from the most immediate COVID-19 Crisis Monitoring and Response to issues like continued modifications to the Defender 2020 exercise in Europe and standing up the the new V Corps, which is expected to be operational this fall.

It also suggests initial actions for the G-3/5/7, like organizing the response force into teams; physically separating them with “no in-person contact between groups;” and maximizing “dispersed work facilities equipped with needed NIPR/SIPR,” the service’s secure and non-secure networks.

“How does the organization physically separate teams (to minimize risk of transmission) and create redundancy (in the event of compromise) while ensuring effective communication across dispersed teams to facilitate effective and timely action?” the problem statement in the document asks.

Another of the documents lays out talking points, suggested by Gericke, which are intended to help senior leaders communicate internally with the rest of the force.

One mentions the “Army COVID Campaign Plan,” which would “be the vehicle that will allow Army Senior Leadership to look further out (60 or 90 days and beyond) so we can make informed decisions.”

Another point says the fight against the virus “is truly a global, all-domain operation … Everyone is and will continue to be involved in this fight. The Army will likely be asked to do things that we have never been asked to do before.”

Another urges installation commanders to “be prepared to conduct media outreach as necessary.

“Soldiers are facing unusual and unprecedented experiences both on duty and in their personal lives,” the document says. “Over-communicate!

The Army has already taken several major steps to address the COVID-19 outbreak: retired soldiers who worked in certain medical professions are being asked to consider returning to active-duty; Army recruitment is going 100% virtual to protect soldiers and recruits; and three field hospitals are being deployed to Washington state and New York to assist with the response, all while the service's researchers and scientists work to find a vaccine and treatments for the virus.

But at the same time, the service seems unsure of what to do about things like training exercises as the virus continues to spread, with additional internal documents illustrating a need to do more to protect the force.

“Mitigation measures taken by the U.S. Army to blunt the spread of COVID-19 have proven insufficient,” a message from from the Department of the Army to Army commands said, according to documents obtained by James LaPorta.

The New York Times reported on Wednesday that the Army ordered most training and non-essential activities that require soldiers to be in close contact to stop earlier this week, only to later reverse the decision.

But while the service works out its own path forward, Gericke and his team expect the Army to continue to be the tip of the spear for the Pentagon's response.

“Units need to be flexible and ready to respond to the nation’s call,” the document of suggested talking points says. “The Army, because of our capabilities and people, is going to continue to be the largest contributor in terms of personnel for this operation in DoD.”