"There are many details still being worked and discussed with our Allies and partners." 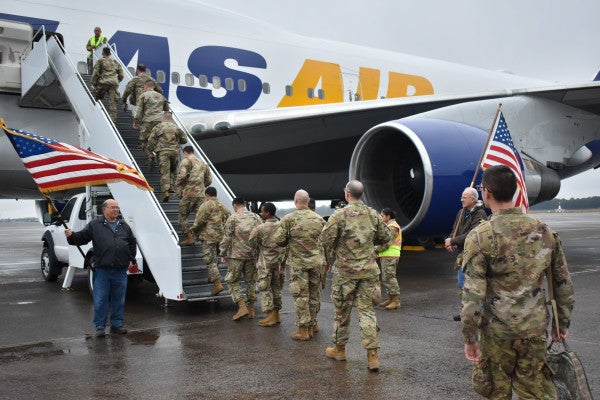 A huge U.S. Army exercise expected to include thousands of soldiers and scheduled to begin in April is being scaled back as the new coronavirus, COVID-19, continues to spread.

After initially announcing that the number of U.S. participants in Defender-Europe 20 would be reduced, U.S. European Command said on Monday that all equipment and personnel moves have stopped, and some exercises have been cancelled.

Since January, around 6,000 soldiers deployed from the U.S. to Europe, according to Levine; thousands of vehicles and pieces of equipment have also been moved.

Last week, EUCOM announced that the Defender 2020 exercise was being modified by “reducing the number of U.S. participants.”

A defense official told Task & Purpose that the exercise was anticipated to be reduced by less than 10,000 troops.

Defender 2020 was billed as the largest deployment of U.S.-based troops to Europe in the last 25 years, involving 20,000 U.S. soldiers and service members from 18 other partner nations. Equipment and personnel started moving in February.

The new coronavirus is axing military exercises and events left and right, including a trip for Defense Secretary Mark Esper who had to postpone his trip to India and Central Asia to focus on the Pentagon's response tot he spreading virus.

Last week, Army Secretary Ryan McCarthy announced that the commander of Army Europe, Lt. Gen. Christopher Cavoli — along with several of his staff — were quarantining themselves as they “may have been exposed” to COVID-19 at a conference.

“There are many details still being worked and discussed with our Allies and partners. Changes are anticipated to the deployment timelines of soldiers currently in Europe, redeployment of U.S.-based equipment, and the next Atlantic Resolve rotation,” EUCOM said on Monday. “We will continue to provide updates as details become available about these adjustments.”

Update: This post was updated at 10:30 a.m. on March 16 with additional information.