"We’re trying to mitigate it the best way we know" 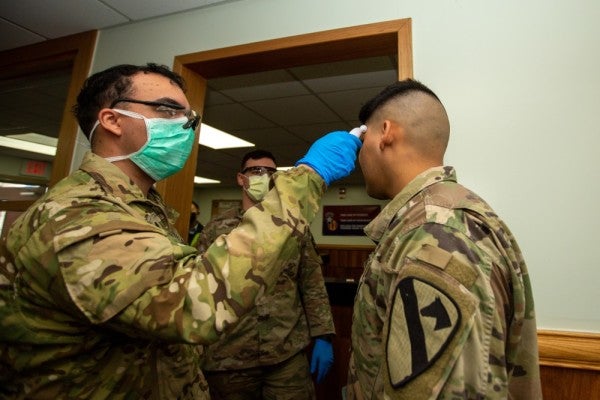 SAN DIEGO — At the premier naval conference on the West Coast, the coronavirus seems to be top of mind, though the chiefs of the Navy, Marine Corps, and Coast Guard all say the virus has not yet had any significant impact on the military.

“So far [there have been] no big impacts,” said Gen. David Berger, commandant of the Marine Corps, responding to the first question posed during a panel with service chiefs on whether the virus has impacted training or readiness across the force.

No Marines have been infected, said Berger, adding that the Corps decided to move forward with its large-scale Cobra Gold exercise in Thailand, with participating forces coming mainly from the U.S., Japan, and Thailand. “The biggest impact so far has been on the command post exercise in Korea, which had to be tailored way back because of the spread of the disease,” Berger said.

Likewise, Navy Adm. Gilday said there was no “significant” impact on his service, though he noted that some units are taking precautions, such as the Italy-based 6th Fleet, which is prohibiting troops from traveling to the northern part of the country. Italy has reported 29 deaths amid more than 1,000 coronavirus cases, the most in Europe, according to Al Jazeera.

Gilday said that medical personnel were being trained on how to detect the virus, and there are ongoing discussions over further scaling back exercises and canceling port visits for ships.

“Obviously we have not contained the virus from the continental United States, but we’re trying to mitigate it the best way we know,” Gilday said.

The Coast Guard, meanwhile, has been screening ships coming out of China, and others that may come near the U.S, said Adm. Karl Schultz, commandant of the Coast Guard.

There have been nearly 90,000 cases reported and more than 3,000 deaths from the virus worldwide, according to The World Health Organization.

So far, there have been 62 cases in the United States. On Monday, health officials said that six people in the Seattle area had died from illness caused by coronavirus.