The US may have postponed its massive European war games, but Russia sure as hell didn’t

The U.S. military may have scaled back its massive Defense-Europe 20 exercise in Europe due to the global novel coronavirus (COVID-19) pandemic, but Russia is moving full steam ahead with its own military war games on Ukraine's doorstep 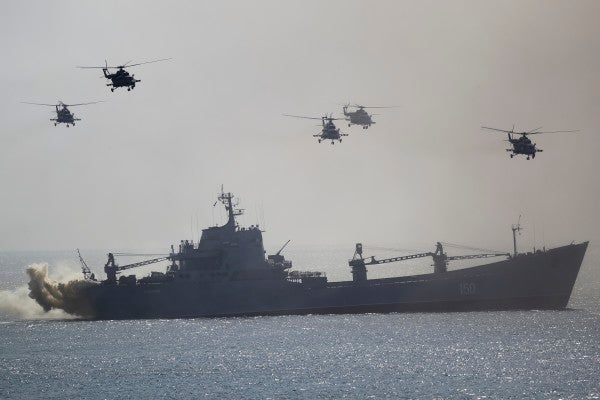 The U.S. military may have scaled back its massive Defense-Europe 20 exercise in Europe due to the global novel coronavirus (COVID-19) pandemic, but Russia is moving full steam ahead with its own military war games on Ukraine's doorstep.

The Russian military has continued to conduct military drills in Crimea despite growing fears over the spread of the virus, Shepherd Media reports, exercises that included land, sea, and air operations

The Russian military on Friday deployed 1,500 paratroopers from the Novorossiysk airborne assault division and artillery forces assigned to Black Sea Fleet's Army Corps to Crimea, according to the UK-based Defence Blog.

“During the joint tactical flight drills of the Airborne Force and military transport aviation, more than 1,500 personnel of the Novorossiysk airborne assault large unit flew from the takeoff aerodromes to large distances aboard 15 Il-76 planes of military transport aviation and landed on the landing sites of Opuk training range,” the Russian Ministry of Defense said in a Friday statement, per Defence Blog.

“The crews of Su-24MR reconnaissance planes, Su-24M front-line bombers, Su-30SM multi-task fighters, An-26 planes, Be-12 anti-submarine amphibious aircraft, Mi-8 and Ka-27 helicopters, more than 30 units from the naval aviation and air defense of the Black Sea Fleet were involved in the events,” according to the Russian MoD.

Days later, the Black Sea Fleet frigate Admiral Essen conducted combat training exercises which saw the vessel's crew “[improve] the tactics of single-ship combat with surface ships of the mock enemy and the organization of the ship's air defense,” according to the Russian MoD.

The busy weekend for Russian forces represents just the latest installment in military exercises scheduled to grace the Crimean peninsula “until the end of March,” according to Defence Blog, concluding with a force-on-force tactical drill and an amphibious assault landing practice.

The U.S. military and its allies have been on heightened alert for Russian activity since the military annexation of Crimea by Russian forces in 2014.

While Russia has held military exercises on the Crimean peninsula before, it has never attempted them during a global pandemic that's forced militaries around the world to reorient themselves towards containing the spread of COVID-19 at home.

Indeed, news of Russia's military exercises comes as the U.S. military announces plans to scale back Defender-Europe 20, which would have seen 20,000 troops in total deploy from units in 15 states to join existing U.S. forces on the continent in the largest European war games since the end of the Cold War.

A defense official previously told Task & Purpose that the exercise was anticipated to be reduced by less than 10,000 troops.

Speaking to reporters at the Pentagon on Monday, Defense Secretary Mark Esper for the first time acknowledge that U.S. military readiness might be impacted by the spread of COVID-19.

“As this virus ramps up and spreads, we'll obviously see more and more impact (on) persons in our ranks,” he said. “I'm confident that while it may have some impact on readiness, it will not affect our ability to conduct our national security missions, both at home and abroad.”