'I think it is a combat experienced force; but it’s not a combat-tested force.' 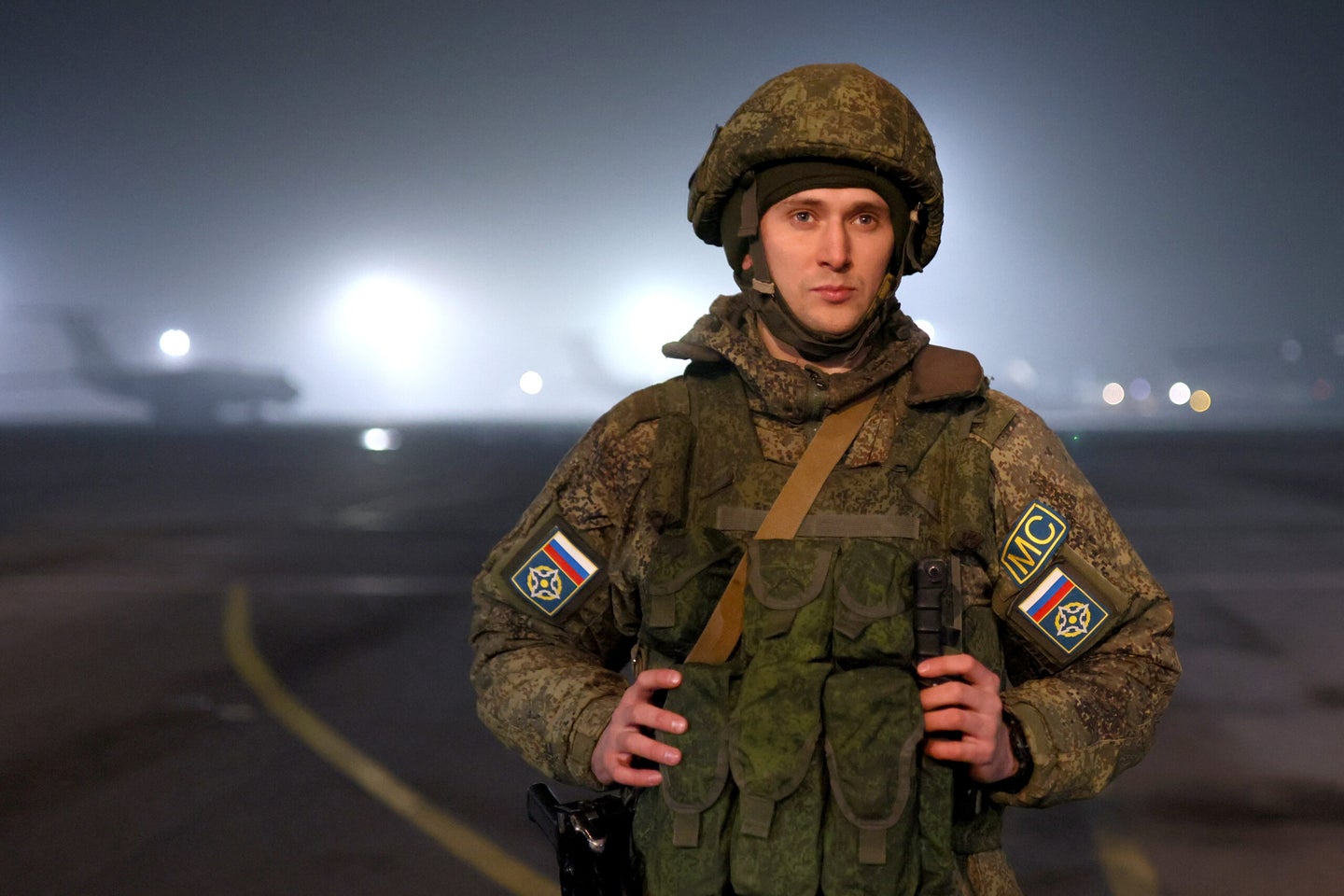 ALMATY, KAZAKHSTAN - JANUARY 12, 2022: A Russian peacekeeper is seen while passengers of an evacuation flight to Russia board a plane at Almaty International Airport. Russian military planes have evacuated 1,719 Russian and foreign citizens from Kazakhstan. Protests began in several Kazakh cities on January 2. Thousands of people were injured, some were killed. President Tokayev asked the members of the Collective Security Treaty Organization (CSTO) for help. Valery Sharifulin/TASS (Photo by Valery SharifulinTASS via Getty Images).
SHARE

Russian troops have fought in several warzones over the past 20 years, but a new invasion of Ukraine would mark the first large-scale conventional war for the Russian military since the fall of the Soviet Union, said retired Army Lt. Col. Alexander Vindman, an expert on Russia and Ukraine.

The Russian military has made significant improvements since it examined its failings in the 2008 war against Georgia, especially in areas such as massing large-scale fires, Vindman said. Yet the last time that Russian troops conducted the types of combined arms operations that might take place in Ukraine was when the Red Army fought in Afghanistan.

Between December 1979 and February 1989, more than 600,000 Soviet troops deployed to Afghanistan as part of the 40th Army, which included three motor-rifle divisions, an air assault division, and its own air corps with helicopters and fighter bombers, according to Rodric Braithwaite’s book “Afghantsy.”

At its peak, the 40th Army had more than 100,000 soldiers serving in Afghanistan. The Red Army launched repeated ground and air operations in efforts to defeat Mujahideen fighters who received arms and other support from the United States. The Soviet Union officially estimated that it lost about 15,000 troops during the 10 years of war in Afghanistan, but the Russian general staff later put that figure at more than 26,000, according to “The Soviet-Afghan War,” translated by Lester Grau and Michael Gress.

“I think it is a combat experienced force; but it’s not a combat-tested force – the difference being that they haven’t had to face real significant challenges with near-peers or large-scale conventional operations,” said Vindman, now a senior policy with the Foreign Policy Institute of The Johns Hopkins University’s Paul H. Nitze School of Advanced International Studies

While Russian airborne and “Spetsnaz” special operations forces have made numerous combat deployments and many officers from frontline divisions have ground combat experience, Russian troops have mainly fought against insurgents in places such as Chechnya, Syria, Libya, and now Kazakhstan, Vindman said.

Far fewer Russian troops have been deployed to war zones over the past 20 years than their American counterparts, said Vindman. A new invasion of Ukraine would see conventional Russian units deployed in numbers not seen in the post-Cold War world.

“Historically, what you have is an officer corps that’s rotated through there [war zones]; you have some support capabilities; they like to test their snipers in this area; electronic warfare along Ukraine; but they haven’t been able to employ entire formations in the same way,” Vindman said. “They’ve used airpower and sea-based precision-guided munitions for strikes in Syria, but that’s not the same thing as conducting consistent operations either during the high-intensity phase or during counter-insurgency operations.”

He also said he believed Russia would wait until the Winter Olympic Games in Beijing conclude next month before starting new military operations in Ukraine, partially because Russia will need support from China. Russia’s invasion of Crimea happened immediately following the 2014 Olympic games in Sochi, Russia.

Russian special operations units may have fought in several countries, but Ukrainian forces also have extensive combat experience from fighting the Russians for the past eight years, said Evelyn Farkas who served as deputy assistant secretary of defense for Russia, Ukraine, and Eurasia from 2012 to 2015.

At the moment, the front line in Eastern Ukraine mirrors the conditions of World War I. Ukrainian troops have dug a series of trenches that are just a couple hundred meters away from Russian-led separatist forces. It is a war of snipers and artillery being fought from fixed positions.

Nolan Peterson, a senior editor with Coffee or Die Magazine, noted that Ukrainian troops avoid using handheld radios on the frontlines because the Russians can intercept their transmissions and pinpoint the sources of radio signals for artillery strikes.

The prospect of a new Russian invasion means the conflict could once again become a war of maneuver. Russian-led forces will likely try to encircle entire Ukrainian formations, as they did at the Battle of Debaltseve in early 2015, when thousands of Ukrainian troops made a chaotic retreat to avoid being killed or captured.

This is the type of strategy that the Red Army used to defeat the Germans during World War II. It reached its zenith with Operation Bagration in the summer of 1944 when the Soviets encircled and annihilated most of the German units on the Eastern Front.

The Russians have more troops and better weapons than the Ukrainians, but their accumulated combat experience is not likely to provide them with a significant advantage against Ukrainian forces, Farkas said.