The platoon sergeant who gave his life to repel dozens of Iraqi troops with a .50 cal

In April 2003, Sgt. 1st Class Paul Smith fought through a hellish firefight and sacrificed his own life to save countless others. 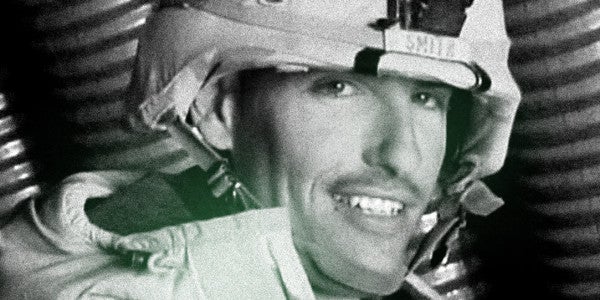 If you’ve served in the U.S. Army at some point over the past decade, you’ve probably heard of Sgt. 1st Class Paul Smith. Within the ranks, his name has become synonymous with extraordinary courage in the face of overwhelming odds. And for good reason.

In April 2003, Smith fought through a hellish firefight, sacrificing his own life to save countless others, becoming the first American service member to earn the Medal of Honor after the Sept. 11 terrorist attacks.

By 2003, Smith, a 33-year-old combat engineer who had enlisted in the Army in 1989, was already a veteran of Desert Storm and the war in Kosovo. And as a platoon sergeant with Bravo Company, 11th Engineer Battalion, 3rd Infantry Division, he was one of the first soldiers to cross the berm into Iraq during the initial invasion.

On April 4, two weeks after the official start of the war, Smith’s company, having just arrived at the Baghdad International Airport after an all-night convoy through the desert, found themselves occupying a section of a four-lane highway split by a median and bordered on both sides by high walls, which Smith worried obscured the company’s view of potential enemy avenues of approach

“It was very, very quiet,” Lt. Brian Borkowski, Smith’s platoon leader, later told The Christian Science Monitor. “Every two minutes or so, there was gunfire, but it was so sporadic that it made it kind of eerie. We started to realize that we had surprised the heck out of [the Iraqis], and they were just waking up to find Americans all around them.”

Smith called for a bulldozer. He had a plan: Plow a hole through the wall. On the other side, the soldiers discovered a courtyard, and a call from up higher ordered them to build a temporary detention facility there to house a group of Iraqi prisoners of war. But first, the area needed to be cleared, which meant that a gate on the far side of the courtyard needed to be opened lest enemy soldiers were on the other side waiting to attack.

There were. When an armored personnel carrier busted through the gate it was struck by a rocket-propelled grenade and a 60mm mortar. They had kicked the hornet’s nest. Smith and his men suddenly found themselves in a vicious firefight with approximately 100 Republican Guard troops that raged for the next hour and a half. Three of the soldiers in the personnel carrier were wounded. Meanwhile, enemy soldiers scrambled into a nearby tower and began hammering the courtyard with gunfire.

Now, all that stood between the enemy and the interior of the airport, where a U.S. command center and an aid station had been set up, were Smith and his men. And they were under threat of being overrun. According to his Medal of Honor citation, Smith “moved under withering enemy fire to a man a.50 caliber machine gun” mounted on the damaged personnel carrier. While another soldier tended to the wounded, Smith directed the driver to position the carrier so he could cover both the gate and the tower.

“Not all soldiers would jump on top of a vehicle that has already gotten hit while bloody people are being taken out of it,” one of Smith’s soldiers, Spc. Daniel Medrano, told The Christian Science Monitor. “He did it because he knew if he didn’t, we would get slaughtered.”

For the next 10 minutes, Smith unleashed hell on the enemy, firing more than 300 rounds at the Iraqi troops attempting to swarm the courtyard. According to his medal citation, Smith’s actions “resulted in as many as 50 enemy soldiers killed. Meanwhile, an assault element managed to reach the tower and kill the Iraqis there as well. But before the dust settled, Smith’s gun fell silent. He had been shot in the head.

Two years later, in 2005, Smith was posthumously awarded the Medal of Honor. His wife and two children accepted it on his behalf. “We count ourselves blessed to have soldiers like Sgt. Smith, who put their lives on the line to advance the cause of freedom and protect the American people,” President George W. Bush said at the ceremony.