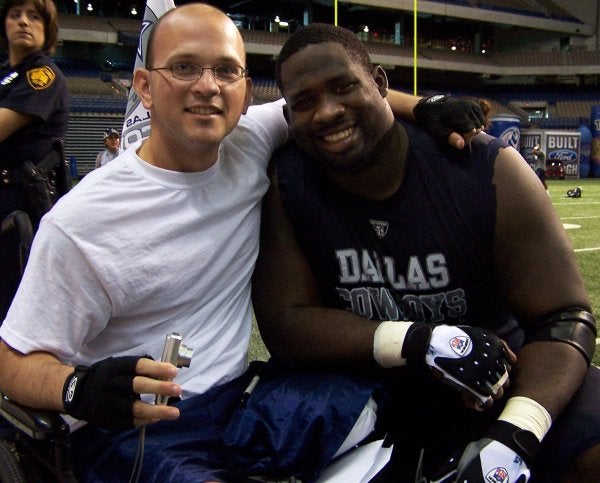 The Distinguished Service Cross was made for guys like Sgt. Daniel Cowart, who literally tackled and “engaged…in hand to hand combat” a man wearing a suicide vest while he was on patrol in Iraq.

So it's no wonder he's having his Silver Star upgraded to the second-highest military award.

Cowart, who served with 3rd Battalion, 8th Cavalry Regiment, 3rd Armored Brigade Combat Team, is being awarded the Army's second-highest medal in March due to his “exceptionally valorous conduct” in Iraq on July 12, 2007. His award upgrade stems from a review ordered by former Defense Secretary Ash Carter, according to a press release from Fort Hood.

He was later medically-retired from the Army in Sep. 2008.

Cowart's Silver Star citation says that his platoon engaged with a stopped vehicle during a combat patrol. When the soldiers approached the vehicle, the occupants “burst from the vehicle, one wielding a rifle which he fired at two of the nearby Soldiers and the other wearing a suicide vest.”

Cowart tackled the man wearing the suicide vest, and hurled “himself and the man away from the vehicle.”

He was “traumatically” injured when the man detonated the vest, the citation reads, but prevented the other soldiers or civilians from being harmed.

The ceremony for Cowart's award will take place on March 20 at Fort Hood, Texas.

Here's his full citation for the Silver Star:

On May 13, 2007, while serving as Gunner, 1st Platoon, Delta Company, 3rd Battalion, 8th Cavalry Regiment, Sgt. Cowart distinguished himself by exceptionally valorous conduct in the face of the enemy. During the conduct of a combat patrol along a main supply route, Sgt. Cowart's platoon halted to conduct a traffic checkpoint. When the occupants of a stopped vehicle would not exit their vehicle, Sgt. Cowart and three of his comrades dismounted their vehicle and approached the stopped vehicle and took positions to engage with the occupants. While they were near the vehicle, the occupants burst from the vehicle, one wielding a rifle which he fired at two of the nearby Soldiers and the other wearing a suicide vest. As the rifle wielding insurgent was engaged by another Soldier, Sgt. Cowart maneuvered around the vehicle and engaged the suicide vest wearing insurgent in hand to hand combat, tackling the man and hurling himself and the man away from the vehicle. Despite the confusion, the insurgent detonated his vest, thereby traumatically wounding Sgt. Cowart. Due to his ability to discern the threat to his comrades and his utter disregard for his own safety, Sgt. Cowart was able to prevent further injury to his fellow Soldiers and nearby civilians.

SEE ALSO: Soldier billed as 'timeless example of heroism under fire' to have award upgraded to Distinguished Service Cross

WATCH NEXT: The Soldier Of The Future