"My dad always told me that if you're going to do something, do it right" 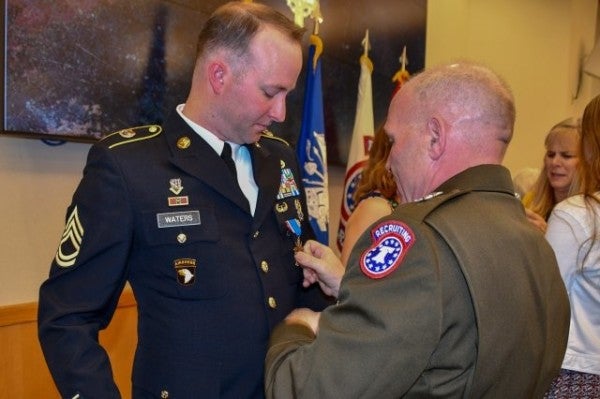 An Army recruiter who previously served as a medic in Afghanistan had his Silver Star upgraded to a Distinguished Service Cross after he saved the lives of three of his fellow soldiers while under enemy fire in Afghanistan in 2008.

Sgt. 1st Class Gregory Waters was injured on July 30, 2008, after an IED “caused massive damage” to the vehicle he and other members of his platoon were occupying at the tim.

According to the Army, then-Spc. Waters “ignored his own injuries and engaged the enemy while dragging three injured soldiers from the vehicle to safety.”

While under enemy fire, Waters stabilized the injured soldiers, provided cover for the rest of his platoon, and “continued to engage the enemy while directing the medical evacuation.”

“I was a medic, and I did my job taking care of wounded soldiers,” he said, per the Army's press release. “I would not have changed anything. Someone had to be in that seat; if it wasn't me, I would be putting someone else in harm's way.”

Maj. Gen. Frank Muth, the head of Army Recruiting Command, awarded the Distinguished Service Cross to Waters on June 5th, saying he was in “the right place at the right time.”

“His decision to join the Ary ensured he was right where he needed to be when he was needed,” Muth said. “His skills and training enabled him to maintain his composure and get his fellow soldiers to safety that day, saving their lives.”

Waters was raised by two Air Force veteran parents, and originally did not plan on joining the service. He ended up enlisting in the Army Reserve in 2003 after needing financial assistance for art school, per the Army. He became an Army recruiter in 2013.