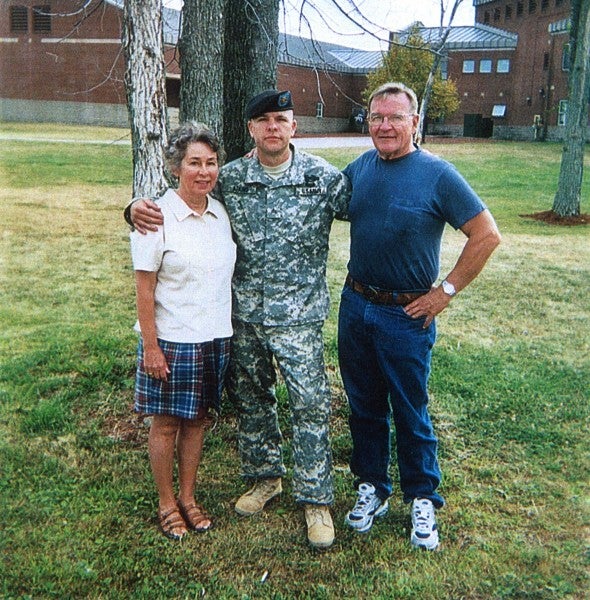 Described as “selfless,” “a master of his craft,” “the greatest father,” and the kind of leader you'd “want to work for,” Staff Sgt. Travis Atkins gave his life on June 1, 2007, when he tackled a suicide bomber to protect his soldiers from the blast in Iraq.

On the day before Atkins is to posthumously receive the Medal of Honor, Atkins' battle brothers and family gathered on Tuesday to recount his successes as the father, son, leader, and friend that they knew.

Former Army Sgt. Jared Venable was 18 years old, fresh out of basic training, and scared out his mind when he went to join Atkins' platoon in Iraq in 2006.

“I was 18 years old — well frankly, I was just really scared, and they told me to go see my new team leader, Sgt. Atkins, and I did,” Venable, now retired, told reporters at a roundtable on Tuesday. “He made me feel like there was a chance, and that…I could trust him, there was somebody there that knew what they were doing.”

“I remember one time we were sitting on the roof, somewhere in Iraq, and I remember just thinking, 'I have so much respect for him,'” Venable said. “It was kind of akin to being star-struck when he talked to you, you know?”

For retired Col. John Valledor, who was Atkins' Battalion Commander at the time and the person who submitted his original Medal of Honor recommendation, the thing that struck him most about Atkins came one day after his team's Humvee was destroyed by an IED.

Valledor said the way that Atkins responded — joking with his soldiers and not dwelling on what had just happened to them — proved the kind of leader he was.

“He used humor at that moment to deflect the pain aspect of what they had just encountered…and what I saw in that activity was a true leader,” Valledor told Task & Purpose. “This is the one and only time — that memory will endure with me for the rest of my life. I remember as I was driving away, I was talking to our sergeant major, and I was saying, 'Can you believe that? The man has just survived a catastrophic IED attack, and there was zero discussion about pain, agony, anguish.'”

Former Sgt. San Aijo was one of the soldiers Atkins saved the day he lost his life. He told reporters that they were called out after reports of “four suspicious-looking men” came in. They were in a rural area, on a road framed by canals with 10-12 foot reeds on either side. Aijo said the men, now down to two when the soldiers arrived, were “very fidgety.”

Atkins exited their vehicle and approached the men, along with the team's medic. Aijo said he was trying to provide cover to both men, but because Atkins was more experienced, he focused more on the medic.

“I start to notice Travis begin hand-to-hand combat with this man,” he said. “All of a sudden I see Travis wrap the guy up, and he lifted him up and he slams him to the ground. Honestly the first thought that crossed my head was just how impressive the slam was, like UFC wrestling it was impressive. … He kind of began to position himself between — while still, mind you, holding this guy down — he positions himself more towards us…and that's when the detonation happened.”

Aijo said at first he thought Atkins and the man he tackled had rolled over an IED, because suicide bombers were so uncommon in the area they were operating in.

“[Atkins was] the expert on that piece of terrain…so it is no doubt in my mind that when he dismounted that vehicle and encountered the two individuals, he knew instantaneously that he was dealing with a mortal threat given his experience on the ground, and that he did everything humanly possible — physically — to ensure that mortal threat did not affect his fellow soldiers,' he said.

Atkins' son, Trevor Oliver, told reporters that he was the first in his family to learn that his father would receive the Medal of Honor

“I was directed down a long line of calls, from essentially what I thought were scam artists, I didn't know what was going on,” Oliver said. “And eventually it turned out to be President Donald Trump on the end of the line, so he was the one who told me formally and talked to me for a good few minutes, personally, as well.”

The award is an upgrade from Atkins' Distinguished Cross. Oliver — who was 11 years old at the time Atkins was killed — will be accepting the nation's highest award for valor on his father's behalf.

“What I want people to realize is that what he did was very heroic and very brave, and I'm not taking away from that,” Venable told Task & Purpose, emotionally. “But I want people to understand the motivation behind it. He loved us…what he did was all that, yes, but it came from just a place of intense care, and a sense of duty, and a sense of honor.”

SEE NEXT: This Army Hero Fought Off 600 Nazis Virtually Alone. Now He's Getting The Medal Of Honor