Robert D. Maxwell, the Army communications technician and oldest Medal of Honor recipient, has died at 98, nearly 75 years after he leapt on a grenade to save his fellow soldiers during a pitched September 1944 firefight in eastern France. 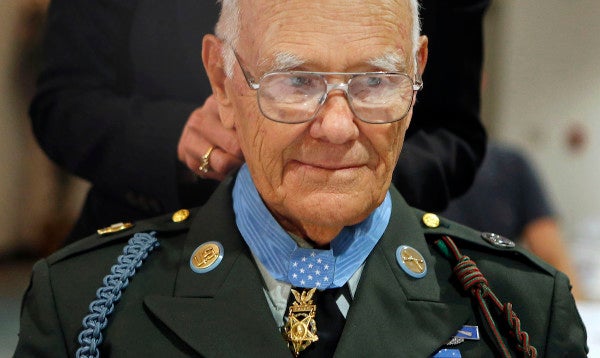 Former World War II-era Army communications technician and Medal of Honor recipient Robert D. Maxwell has died at age 98, nearly 75 years after he leapt on a grenade to save his fellow comrades-at-arms during a pitched September 1944 firefight in eastern France.

Maxwell, who was given the U.S. military's highest award for valor in 2012, was the oldest living Medal of Honor recipient in the United States when he died Saturday in the town of Bend, Oregon, according to the Associated Press.

Born in 1920 and assigned to Headquarters Company, 3rd Battalion, 7th Infantry Regiment, 3rd Infantry Division during World War II, then-Technician Fifth Grade Maxwell was among a group of four soldiers who staged a heroic defense of a critical battalion observation post near the French city of Besancon with nothing but their M1911 sidearms on Sept. 7, 1944.

According to his Medal of Honor citation, not only did Maxwell lead a successful defense of a vital military communications system through sheer grit and determination, but selflessly sacrificed himself by jumping on a German grenade to protect his fellow squad mates in what the Department of Defense characterized as “instantaneous heroism.” From his award citation:

Technician Fifth Grade Maxwell and three other soldiers, armed only with .45 caliber automatic pistols, defended the battalion observation post against an overwhelming onslaught by enemy infantrymen in approximately platoon strength, supported by 20-mm. flak and machinegun fire, who had infiltrated through the battalion's forward companies and were attacking the observation post with machinegun, machine pistol, and grenade fire at ranges as close as ten yards.

Despite a hail of fire from automatic weapons and grenade launchers, Technician Fifth Grade Maxwell aggressively fought off advancing enemy elements and, by his calmness, tenacity, and fortitude, inspired his fellows to continue the unequal struggle. When an enemy hand grenade was thrown in the midst of his squad, Technician Fifth Grade Maxwell unhesitatingly hurled himself squarely upon it, using his blanket and his unprotected body to absorb the full force of the explosion.

Beyond the Medal of Honor, Maxwell received two Silver Stars, two Purple Hearts, and a Bronze Star in recognition of his heroic actions during his four year in the Army during World War II, not to mention two French combat awards.

Here's to you, Robert D. Maxwell. There isn't a field in Valhalla that can hold balls as enormous as yours.