75 years ago, this ‘stouthearted and indomitable’ Medal of Honor recipient leaped on a grenade to save 2 others

On April 15, 1945, Pfc. Harold Gonsalves readily gave his life, so that his fellow marines would survive. 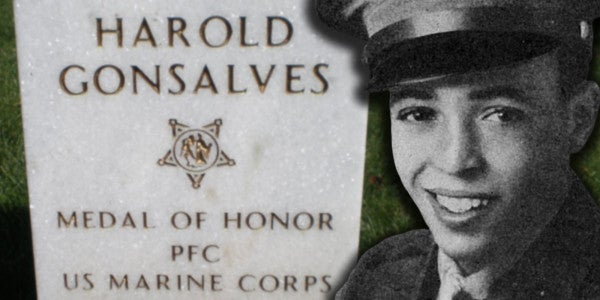 On April 15, 1945, Pfc. Harold Gonsalves was on the front lines of what was to become the last major battle of Pacific Campaign of World War II.

As an artillery Marine tasked with providing fire support for the Marine infantry battalions fighting on Okinawa, Gonsalves didn't need to be as far forward as he was — but when the call went out that volunteers were needed to mark targets for bombardment, he stepped forward.

And he did so again when he leaped on a grenade that landed between him and two other Marines, selflessly sacrificing himself to save the lives of his brothers-in-arms, earning Gonsalves the Medal of Honor.

Born in Alameda, California in 1926, as a teenager the five-foot, nine-inch Gonsalves took up swimming, baseball, football, track and field, and even sang tenor in the school glee club. But after two-and-a-half years in school he dropped out, opting to take a job as a stock clerk in nearby Oakland.

And at 17, he enlisted in the Marine Corps Reserves on May 27, 1943, before being called to active duty just a month later.

Over the next two years Gonzalves saw combat as an artilleryman with the 22nd Marine Regiment during the island hopping campaign of the Pacific, landing on Engebi and the Parry Islands, then on to Eniwetok, and Guam.

By April 1, 1945, he'd been reassigned to the 4th Battalion, 15th Marine Regiment as a forward observer, and had just landed on Okinawa.

The Battle of Okinawa was the last major amphibious assault of World War II — with the goal of providing America a path for a final invasion of mainland Japan. The battle was one of the bloodiest of the Pacific theater, claiming the lives of more than 12,000 Americans and 100,000 Japanese, with tens of thousands of civilian casualties.

On April 15, Gonsalves' battalion was firing artillery at a Japanese position at the top of a mountain. Gonsalves routinely risked enemy fire as he searched for a vantage point so he could direct the unit's guns, and that day proved no different from the ones that preceded it.

When word was passed that his commanding officer wanted the spotters to move their position closer to the front so they could provide more accurate directions for the artillery in the rear, Gonsalves volunteered.

He advanced uphill alongside his commander and another Marine, laying radio wire as they went, even as the mountain's defenders rained small arms and mortar fire down on them.

Just as they reached the front, a Japanese grenade landed in their midst.

Instantly Gonsalves leaped on it, and with his body, he absorbed the full impact of the blast, protecting his fellow Marines from serious injury and death. He was 19 years old.

On June 19, 1946, Gonsalves' heroism was recognized when he was posthumously awarded the Medal of Honor. He is the only Hispanic Marine to have earned the nation's highest award for valor during World War II.

“Stouthearted and indomitable, Pfc. Gonsalves readily yielded his own chances of survival that his fellow marines might carry on the relentless battle against a fanatic enemy,' reads his Medal of Honor citation.

His body was eventually returned to the states, where he was buried with full honors in San Bruno, California. On Okinawa, his legacy endures at Camp Gonsalves, where the Marine Corps' Jungle Warfare Training Center is located.

Pfc. Harold Gonsalves' full Medal of Honor citation can be read below:

For conspicuous gallantry and intrepidity at the risk of his life above and beyond the call of duty while serving as Acting Scout Sergeant with the 4th Battalion, 15th Marines, 6th Marine Division, during action against enemy Japanese forces on Okinawa Shima in the Ryukyu Chain, 15 April 1945. Undaunted by the powerfully organized opposition encountered on Motobu Peninsula during the fierce assault waged by his battalion against the Japanese stronghold at Mount Yaetake, Pfc. Gonsalves repeatedly braved the terrific enemy bombardment to aid his forward observation team in directing well-placed artillery fire. When his commanding officer determined to move into the front lines in order to register a more effective bombardment in the enemy's defensive position, he unhesitatingly advanced uphill with the officer and another Marine despite a slashing barrage of enemy mortar and rifle fire. As they reached the front and a Japanese grenade fell close within the group, instantly Pfc. Gonsalves dived on the deadly missile, absorbing the exploding charge in his own body and thereby protecting the others from serious and perhaps fatal wounds. Stouthearted and indomitable, Pfc. Gonsalves readily yielded his own chances of survival that his fellow marines might carry on the relentless battle against a fanatic enemy and his cool decision, prompt action and valiant spirit of self-sacrifice in the face of certain death reflect the highest credit upon himself and upon the U.S. Naval Service.