75 years ago, Darrell Cole earned his Medal of Honor with nothing more than grenades, a pistol, and ‘unfaltering courage’

On February 19th, 1945, the namesake of the future USS Cole earned the Medal of Honor — and a place in history — at the Battle of Iwo Jima. 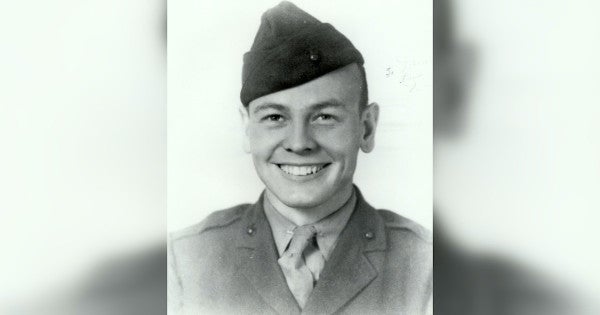 On February 19th, 1945, the namesake of the future USS Cole earned the Medal of Honor — and a place in history — at the Battle of Iwo Jima.

Marine Corps Sgt. Darrell Samuel Cole — then the leader of a machine gun section attached to Company B, 1st Battalion, 23rd Marines, 4th Marine Division — found himself leading his men into almost certain death on the opening day of the Battle of Iwo Jima, where they were “assailed by a tremendous volume of small-arms, mortar and artillery fire,” according to his Medal of Honor citation.

Cole had enlisted in the Marine Corps in 1941. Assigned to the role of bugler, for years he lobbied his commanders for permission to perform line duties. According to the Marine Corps, Cole would first ditch his bugle for a machine gun during the beginning of the Battle of Guadalcanal in August 1942, and again during battles at Kwajalein, Saipan and Tinian, earning a Bronze Star and a reputation as “The Fighting Field Musician” throughout the Pacific campaign.

But on that February day in 1945, Cole finally proved his worth as an American hero — and made the ultimate sacrifice in the process.

After leading his machine gun section ashore, Cole “boldly led his men up the sloping beach toward Airfield No. 1 despite the blanketing curtain of flying shrapnel,” according to his Medal of Honor citation. “Personally destroying with hand grenades two hostile emplacements which menaced the progress of his unit, continued to move forward until a merciless barrage of fire emanating from three Japanese pillboxes halted the advance.”

After eliminating the nearest Japanese emplacement, Cole's weapon jammed, leaving the sergeant with just a pistol a single grenade to deal with those two remaining pillboxes. And that, according to his Medal of Honor citation, that's exactly what he did:

Shrewdly gauging the tactical situation and evolving a daring plan of counterattack, Sergeant Cole, armed solely with a pistol and one grenade, coolly advanced alone to the hostile pillboxes. Hurling his one grenade at the enemy in sudden, swift attack, he quickly withdrew, returned to his own lines for additional grenades and again advanced, attacked, and withdrew.

With enemy guns still active, he ran the gauntlet of slashing fire a third time to complete the total destruction of the Japanese strong point and the annihilation of the defending garrison in this final assault.

Cole was killed instantly by an enemy grenade upon returning to his squad, but his actions “had eliminated a formidable Japanese position, thereby enabling his company to storm the remaining fortifications, continue the advance, and seize the objective,” according to his citation.

“By his dauntless initiative, unfaltering courage, and indomitable determination during a critical period of action, Sergeant Cole served as an inspiration to his comrades, and his stouthearted leadership in the face of almost certain death sustained and enhanced the highest tradition of the U.S. Naval Service,” the citation continues. “He gallantly gave his life for his country.”

The U.S. military's recognition of Cole's sacrifice extended far beyond the Medal of Honor: In 1996, the Navy christened an Arleigh Burke-class guided missile destroyer the USS Cole in honor of his service. That vessel was eventually damaged in a suicide attack in 2000 while anchored in the Yemeni port of Aden.

Here's to you, Darrell Cole: You may have been a terrific bugler, but you were an even better warrior — and you knew it, too.