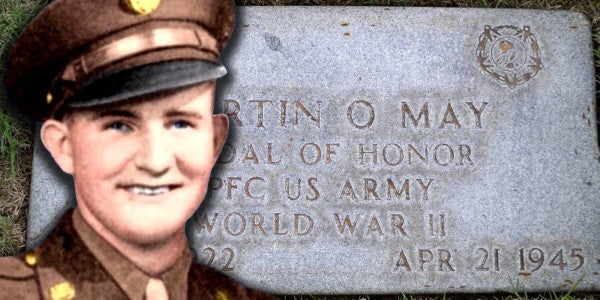 That's how long Martin O. May clung to his fighting position — little more than an exposed perch on Le Shima, one of a cluster of islands near Okinawa, Japan — as he rained down fire from his heavy machine-gun, and was repeatedly wounded during a brutal attack by Japanese forces.

On April 19, 1945, during the Pacific campaign of World War II, May, a private first class with the Army's 307th Infantry Regiment, 77th Infantry Division, took up his post and never left it.

From atop a ridge overlooking friendly lines May engaged the enemy, sweeping his machine gun left and right as he fired off accurate bursts at the attackers, and in doing so, made himself a target.

After fending off the first of a series of attacks, he broke a second counterattack by hurling grenades into the midst of the Japanese forces.

When the call came for the American soldiers to withdraw, May refused, despite the considerable danger. Instead, he volunteered to remain behind so friendly forces could regroup in preparation for a major assault on their position.

It was on the third day that the frontal assault came, and May made his last stand — an act that would cost him his life, and see him posthumously awarded the Medal of Honor, the nation's highest award for valor.

“It found Private First Class May still supporting the rifle company in the face of devastating rifle, machine gun, and mortar fire,” reads his award citation. “While many of the friendly troops about him became casualties, he continued to fire his machine gun until he was severely wounded and his gun rendered useless by the burst of a mortar shell.”

Again, May refused to withdraw, and once more turned to hurling hand grenades down on the Japanese soldiers, before he was wounded again — this time mortally.

In total, May is credited with killing at least 16 enemy soldiers, but it was his courage under fire and his resolve to hold the line, no matter the cost, that inspired his brothers-in-arms to turn the tide of the battle, and ultimately win the day.

Pfc. Martin O. May's full Medal of Honor citation can be read below:

He gallantly maintained a 3-day stand in the face of terrible odds when American troops fought for possession of the rugged slopes of legusuku-Yama on Ie Shima, Ryukyu Islands. After placing his heavy machine gun in an advantageous yet vulnerable position on a ridge to support riflemen, he became the target of fierce mortar and small arms fire from counterattacking Japanese.

He repulsed this assault by sweeping the enemy with accurate bursts while explosions and ricocheting bullets threw blinding dust and dirt about him. He broke up a second counterattack by hurling grenades into the midst of the enemy forces, and then refused to withdraw, volunteering to maintain his post and cover the movement of American riflemen as they reorganized to meet any further hostile action. The major effort of the enemy did not develop until the morning of 21 April. It found Private First Class May still supporting the rifle company in the face of devastating rifle, machine gun, and mortar fire. While many of the friendly troops about him became casualties, he continued to fire his machine gun until he was severely wounded and his gun rendered useless by the burst of a mortar shell. Refusing to withdraw from the violent action, he blasted fanatical Japanese troops with hand grenades until wounded again, this time mortally. By his intrepidity and the extreme tenacity with which he held firm until death against overwhelming forces, Private First Class May killed at least 16 Japanese, was largely responsible for maintaining the American lines, and inspired his comrades to efforts which later resulted in complete victory and seizure of the mountain stronghold.