75 years ago, Edward Dahlgren earned the Medal of Honor for ‘magnificent courage’ in the face of enemy fire

On Feb. 11, 1945, Sgt. Edward Dahlgren assaulted German-held positions in the small country-side town of Oberhoffen, France. Not once, or twice, but six times, with each attack throwing the enemy defenders into further disarray 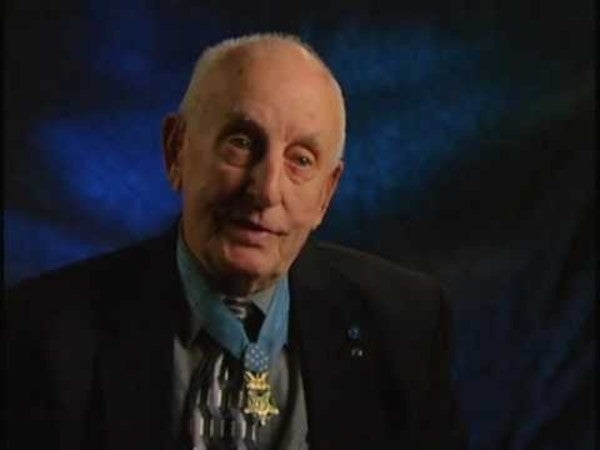 Edward Dahlgren joined the U.S. Army in 1944, and served for 341 consecutive days across all corners of the European theater during World War II, from the liberation of Rome, to house-to-house fighting in the small countryside town of Oberhoffen, France.

It was there, on Feb. 11, 1945, that Dahlgren distinguished himself under fire, displaying “bold leadership and magnificent courage” as he led his platoon through an enemy-held town to rescue another American unit that had been surrounded by German troops.

As the men of 3rd Platoon made their way into small village, then-sergeant Dahlgren caught sight of a group of German soldiers crossing a nearby field roughly 100 yards away. He raced into a nearby barn, where through a small window he opened fire on the exposed German soldiers, killing six, and wounding several others. The attack threw the enemy fighters into complete disarray — and it was something that Dahlgren and his men would do repeatedly throughout the battle.

Once Dahlgren's platoon linked up with the beleaguered Americans, they moved on to a house where eight German soldiers had established a strongpoint. From his Medal of Honor citation:

When the 2 platoons had been reorganized, Sgt. Dahlgren continued to advance along the street until he drew fire from an enemy-held house. In the face of machine pistol and rifle fire, he ran toward the building, hurled a grenade through the door, and blasted his way inside with his gun. This aggressive attack so rattled the Germans that all 8 men who held the strongpoint immediately surrendered.

It continued like that, with Dahlgren advancing street by street under fire and attacking enemy positions so suddenly that the German defenses became a chaotic mess.

At the next house, Dahlgren exposed himself to enemy fire in order to lob rifle grenades at a machine gun team, killing its gunner before moving to the back and taking fire from another machine gun position, this time from a nearby barn. Tossing a grenade into the barn, he rushed the building, firing as he went, and overwhelmed the five German soldiers inside.

Once the barn was cleared, he returned to the house, and climbed through a window. Once inside, he trapped a group of German soldiers in the cellar as he rained grenades down from above. A short while later, 10 more soldiers had surrendered to Dahlgren.

Then, he and his men assaulted another building and cornered the enemy soldiers in the basement. After Dahlgren called out for their surrender, 16 German soldiers emerged from the cellar with their hands in the air.

Following the battle, Dahlgren was commissioned as a second lieutenant.

According to his Medal of Honor citation, Dahlgren's “bold leadership and magnificent courage… were in a large measure responsible for repulsing an enemy counterattack and saving an American platoon from great danger.”

You can read Edward Dahlgren's full Medal of Honor citation below:

He led the 3d Platoon to the rescue of a similar unit which had been surrounded in an enemy counterattack at Oberhoffen, France. As he advanced along a street, he observed several Germans crossing a field about 100 yards away. Running into a barn, he took up a position in a window and swept the hostile troops with submachine gun fire, killing 6, wounding others, and completely disorganizing the group. His platoon then moved forward through intermittent sniper fire and made contact with the besieged Americans. When the 2 platoons had been reorganized, Sgt. Dahlgren continued to advance along the street until he drew fire from an enemy-held house. In the face of machine pistol and rifle fire, he ran toward the building, hurled a grenade through the door, and blasted his way inside with his gun. This aggressive attack so rattled the Germans that all 8 men who held the strongpoint immediately surrendered. As Sgt. Dahlgren started toward the next house, hostile machinegun fire drove him to cover. He secured rifle grenades, stepped to an exposed position, and calmly launched his missiles from a difficult angle until he had destroyed the machinegun and killed its 2 operators. He moved to the rear of the house and suddenly came under the fire of a machinegun emplaced in a barn. Throwing a grenade into the structure, he rushed the position, firing his weapon as he ran; within, he overwhelmed 5 Germans. After reorganizing his unit he advanced to clear hostile riflemen from the building where he had destroyed the machinegun. He entered the house by a window and trapped the Germans in the cellar, where he tossed grenades into their midst, wounding several and forcing 10 more to surrender. While reconnoitering another street with a comrade, he heard German voices in a house. An attack with rifle grenades drove the hostile troops to the cellar. Sgt. Dahlgren entered the building, kicked open the cellar door, and, firing several bursts down the stairway, called for the trapped enemy to surrender. Sixteen soldiers filed out with their hands in the air. The bold leadership and magnificent courage displayed by Sgt. Dahlgren in his heroic attacks were in a large measure responsible for repulsing an enemy counterattack and saving an American platoon from great danger.