It's not a stretch to say that the acts of heroism, courage, and sacrifice laid out in these citations are super human. It seems only natural they get the super hero treatment. 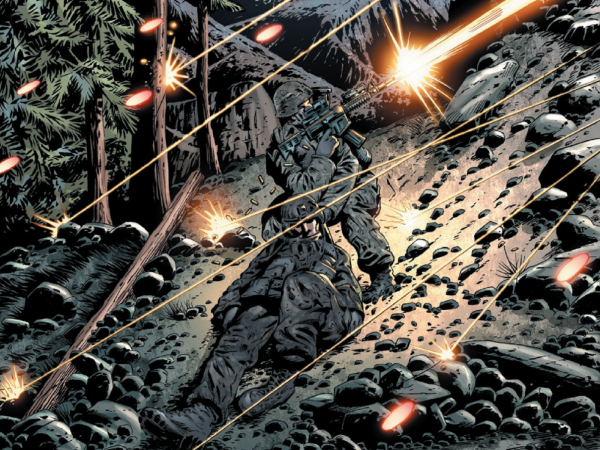 The heroics of Medal of Honor recipients have been captured in news stories, television series, movies, and books.

Now, they're finding their way onto the pages of comic books. It's fitting, really. It's not a stretch to say that the acts of bravery and selfless sacrifice laid out in those citations are super human. It seems only natural they get the super hero treatment, but not in a cheesy “wham” “bam” fashion.

On Oct. 10, the Association of the United States Army released two new graphic novels that tell the stories of Medal of Honor recipients Audie Murphy and Sal Giunta.

Issue #3 chronicles Murphy's service as the most highly decorated soldier in American history, whose many exploits during World War II include single-handedly holding off six German tanks and waves of infantry during a firefight in January 1945, for which he was awarded the Medal of Honor.

The fourth addition to the series follows Staff Sgt. Sal Giunta, the first living recipient of the Medal of Honor since the Vietnam War. While on patrol in Afghanistan's Korengal Valley in October 2007, Giunta's platoon was caught in an ambush — braving rockets, grenades, and ferocious small arms fire, Giunta prevented the capture of a fellow soldier, and helped turn the tide of battle.

Despite the content of each individual comic, they're designed to be easy reads, and at only eight or so pages a piece, they only take a few minutes to get through.

“When you put something like this out you might reach an audience that otherwise wouldn't read a blog, or whatever,” Chuck Dixon, who wrote the script for the comics, told Task & Purpose. “It's just a way to reach a larger audience, because more people should know about these guys. Everybody should know about these guys and the sacrifices they made and their amazing accomplishments.”

An old-hand at putting military service into comic form, Dixon's past work includes The Punisher, Batman and G.I. Joe. Dixon was joined on the project by artist Rick Magyar (Avengers, Captain America and Guardians of the Galaxy); with colors by Peter Pantazis (Justice League, Superman and Wolverine); and the lettering was done by Troy Peteri (Spider-Man, Iron Man and X-Men.)

To get the story right, Dixon said he based the scripts off a trove of material, including award citations, historical records, and in some cases, he supplemented that with books and other accounts, as a way to get those little details that wouldn't make it into the official government report.

For example, for Sal Giunta's comic, Dixon began the script with a flashback to 2003, where we see Giunta working at Subway prior to joining the Army.

“That's the kind of stuff you want in a story like this,” Dixon told Task & Purpose. “It puts across that this is just a regular guy you might have met in public, you know? And then he turns out to be this, basically, a super hero, for what he did in Afghanistan.”

“With Sal Giunta, the most important thing we wanted to get across was the isolation these guys had, and how rough that country was, and Rick Magyar, my artist, he really established how really unforgiving the landscape is in Afghanistan,” Dixon said. “And when you're alone in Afghanistan, you're alone. And that was important in that story and Rick really did a great job.”

As for the issue on Audie Murphy, it was the one Dixon was looking forward to most since the project began.

“When we first started talking about this, I was like 'when are we going to get to Audie Murphy?'” Dixon told Task & Purpose. “Murphy was important to me because growing up he was a hero, both as a World War II vet and as a cowboy star. He was like a double threat when I was a kid. Here was the guy who was an actual real badass up on the screen playing badasses very convincingly, so it was just important to me to get that whole story right because I'd always lived with it; hearing my dad talk about him, and other World War II vets talk about him, and of course the movies he made.”

Each comic undergoes review to ensure every detail — from dates, times and locations, to gear and equipment — is accurate, Dixon said. Joseph Craig, the director of AUSA's book program, told Task & Purpose that the series leans heavily on records, books, and the input of historical advisers to ensure accuracy.

“We want to make sure we're telling the true story, not the legend,” Craig said.

The decision to highlight Medal of Honor recipients throughout the Army's history was a deliberate move, meant “to show that the valor that's associated with them is really not a value that's restricted to one particular era,” Craig explained. “So we wanted to show people at different times throughout the history of the U.S. Army, and wanted to show how these common themes can be found throughout the years.”

Craig explained that the series began with Sgt. Alvin York in October 2018 “because it was the hundredth anniversary of his exploits.”

The second comic featured Staff Sgt. Roy Benavidez, a Green Beret who volunteered to help rescue a 12-man reconnaissance team trapped by the North Vietnamese Army. “We wanted to do something that was more modern, and he's obviously a legend in the Special Forces community,” Craig told Task & Purpose.

Regarding the most recent comics, Craig said that “Audie Murphy came to mind as the most decorated soldier, and Sal Giunta, as the first living recipient since the Vietnam War, he seemed like a good one to introduce the modern era of warfare.”

The four-part Medal of Honor series is available online for free, and in print as a compendium at the AUSA Annual Meeting and Exposition from Oct. 14 to Oct. 16 at the Walter E. Washington Convention Center in Washington, D.C.