Former Blink-182 vocalist Tom Delonge .The U.S. Army. No, this isn't the most unusual team-up in pop culture history — it's a bona fide investigation into the mysteries of super-science 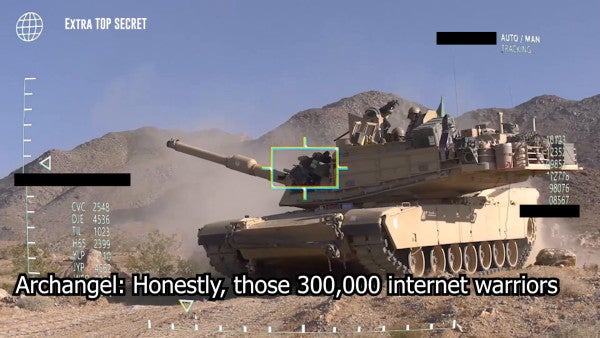 Former Blink-182 vocalist Tom DeLonge .The U.S. Army. No, this isn't the most unusual team-up in pop culture history — it's a bona fide investigation into the mysteries of super-science.

To The Stars Academy of Arts & Science (TTSA) — DeLonge's unusual research company founded and purveyor of authentic U.S. government footage of military UFO encounters —on Thursday announced that it had entered into a Cooperative Research and Development Agreement with the Army Combat Capabilities Development Command.

While the ostensible purpose of the agreement is to “advance TTSA's materiel and technology innovations in order to develop enhanced capabilities for Army ground vehicles” — a focus
confirmed to the War Zone by the CCDC's Ground Vehicle System Center (GVSC) — the research capabilities flaunts TTSA's research into “space-time metric engineering, quantum physics, beamed energy propulsion, and active camouflage,” among others.

TTSA announced the contract just one month after the group posted three U.S. military videos videos of supposed UFO sightings in 2017 and 2018 that ” been through the official declassification review process of the United States government and been approved for public release,” effectively forcing the Navy to acknowledge the existence of UFOs in the first place.

As part of the agreement, TTSA “will share its discoveries” with the Army's GVSC and Ground Vehicle Survivability and Protection (GVSP) programs while the Army furnishes Delonge's crack team of researchers with “laboratories, expertise, support, and resources to help characterize the technologies and its applications.”

“Our partnership with TTSA serves as an exciting, non-traditional source for novel materials and transformational technologies to enhance our military ground system capabilities,” Dr. Joseph Cannon of the nascent Army Futures Command
said in the press release. “At the Army's Ground Vehicle Systems Center, we look forward to this partnership and the potential technical innovations forthcoming.”

To be clear, there's
no money changing hands between the Army and TTSA: the agreement isn't the standard research and development contract designed to deliver a specific next-generation technology. But the specifics of the research agreement, obtained and released through government secrets clearinghouse The Black Vault, suggest that the Army is eager to capitalize on any and all advancements that come out of TTSA, including:

a) Metamaterial: Samples of mechanical and EM sensitive metamaterial collected, obtained, or developed as part of its Field Operations

2. Data associated with testing, developing, and improving persistence or stability of launch vehicles or launch systems

3. Proposed application of these systems

2. Technology associated with these systems

4. Proposed application of these systems

So, to be clear: Tom DeLonge, who
purportedly quit one of the most iconic pop-punk bands of all time to pursue the proof about UFOs, is now getting a metric fuck-ton of support from the Army in exchange for whatever future tech his team happens to stumble on.

Read the entire Army-TTSA research agreement below courtesy of The Black Vault: