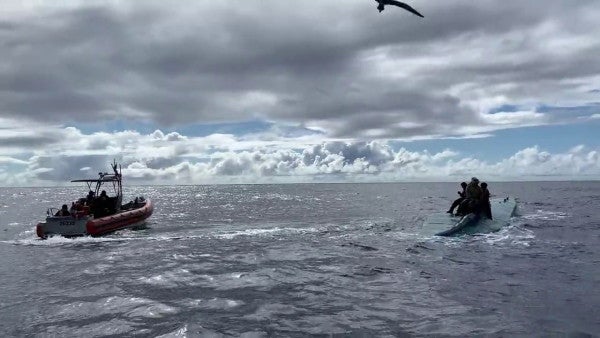 Cocaine valued at approximately $69 million was removed from the semi-submersible. The crew was alerted to the presence of a suspected narcotic-trafficking semi-submersible vessel by the crew of a maritime patrol aircraft on patrol in the region.

Boarding teams from the cutter deployed in interceptor boats and stopped the suspected smuggling vessel just before midnight. The boarding teams took control of the vessel before the four suspected smugglers aboard could sink the craft using installed scuttling valves.

“I am really proud of our crew and the precision and professionalism with which they conducted this interdiction,” said Cmdr. Dorothy Hernaez, Commanding Officer of the Harriet Lane. “It was an all hands on deck effort to properly position the cutter and to safely make the seizure. This interdiction was made possible by great team work, including excellent air support provided by Joint Interagency Task Force South and assistance from Coast Guard Cutter Bertholf's crew in off-loading the bulk contraband from the vessel.”

Coast Guard assets deployed in the Eastern Pacific Ocean and Caribbean Basin increase the U.S. and allied presence in these known drug transit zones off the coasts of Central and South America, in support of the Coast Guard's Western Hemisphere Strategy.

Interdictions are in support of Campaign Martillo, a regional initiative targeting illicit trafficking that threatens security and prosperity at the national, regional, and international levels.

The interdictions are facilitated by detection and monitoring information from Joint Interagency Task Force (JIATF) South, located in Key West.