A former senior Coast Guard official has been accused of shoplifting from a Philadelphia sex shop. 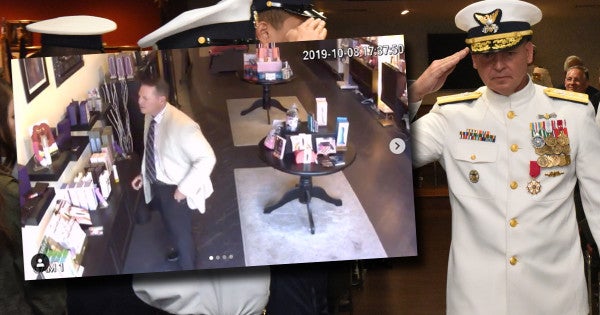 A former senior Coast Guard official has been accused of shoplifting from a Philadelphia sex shop.

Rear Adm. Francis “Stash” Pelkowski (Ret.) was accused of stealing a tester item from Kink Shoppe on Oct. 8, according to an Instagram post by the store that appeared online two days later. In the post, which included apparent security camera footage of the incident, a man can be seen looking at products on a counter before picking up an item and placing it in his pocket before turning and walking away.

The Instagram post identified the man as Pelkowski, and said it wished him “all the best in his retirement, a sincere thank you for your service, and extreme and utter disappointment in his personal morals.”

Pelkowski, who retired from the service in May 2018 after 38 years, oversaw the Coast Guard's more than 7,000 reservists as the Deputy Commandant for Operations Senior Reserve Officer.

“He was trying to be all slick,” said store owner Fred Hovermann, claiming that Pelkowski went back to the tester area, picked up an item, and then kept it in his hand before slipping it into his pocket. Hovermann said he knew the man was Pelkowski because he later made a purchase in the store and used his credit card, which required his signature.

Hovermann provided a copy of the receipt to Task & Purpose, which showed the same date as the security camera footage.

“Mr. Pelkowski denies any criminal conduct, has not been charged with any such conduct and will address any issues related to the posting or its motivations, in appropriate venues,” Kevin Byrnes, an attorney for Pelkowski, told Task & Purpose in an email.

Hovermann later filed a report with Philadelphia Police, which said in a statement to Task & Purpose that it could not confirm the suspect's name. “A white male suspect left the store without paying for an item he took. The investigation is active and on-going with Central Detective Division,” the statement said.