Democratic presidential contender Bernie Sanders promised on Monday to boost healthcare services for military veterans if he is elected, putting a priority on upgrading facilities and hiring more doctors and nurses for the Department of Veterans Affairs. 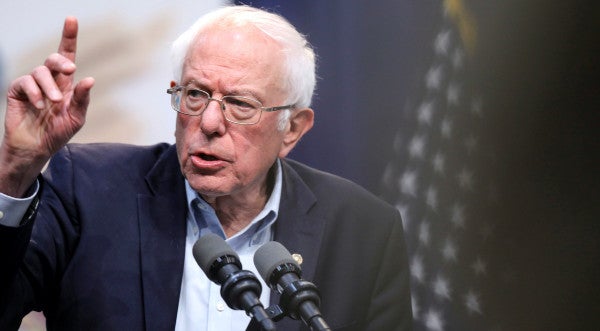 WASHINGTON (Reuters) – Democratic presidential contender Bernie Sanders promised on Monday to boost healthcare services for military veterans if he is elected, putting a priority on upgrading facilities and hiring more doctors and nurses for the Department of Veterans Affairs.

To mark Monday's Veterans Day holiday honoring those who served in the military, Sanders vowed to fill nearly 50,000 slots for doctors, nurses and other medical professionals at facilities run by Veterans Affairs during his first year in office.

Sanders also called for at least $62 billion in new funding to repair, modernize and rebuild hospitals and clinics to meet what he called the “moral obligation” of providing quality care for those who served in the military.

“We will not dismantle or privatize the VA. We will expand and improve the VA,” Sanders, a U.S. senator and a former chairman of the Senate's Veterans' Affairs Committee, said in a statement.

An independent from Vermont, Sanders is one of 17 candidates competing for the Democratic nomination to challenge Republican President Donald Trump in the November 2020 election.

One of the two veterans in the large Democratic field, Mayor Pete Buttigieg of South Bend, Indiana, also released a plan on Monday to serve military communities that advocates streamlining access to medical care including suicide prevention measures.

Sanders' proposal would build on his work with Republican Senator John McCain, who died in 2018, on a 2014 bill to expand veterans' access to healthcare after a scandal over long wait times.

The plan would simplify the claims process so veterans are compensated more quickly and accurately, and put a priority on eliminating a backlog Sanders' campaign said had led to waits of more than 125 days for many veterans to get a determination of their benefits.

The proposal would expand incentives for companies to hire veterans, bolster access to mental health and suicide prevention services and ensure women veterans receive women's health services, including fertility treatments and abortion care, through the VA.

It also would immediately end deportation proceedings against non-citizen members or veterans of the armed forces and their families, and includes a provision to ensure those discharged from the military for marijuana use or possession can apply for an upgrade of their discharges, making them eligible for the full services and benefits offered.