Pete Buttigieg on whether he’s a ‘combat vet,’ ending the war in Afghanistan, ‘Top Gun’ and tattoos

We've been pestering campaign officials since February for an interview with Navy veteran Pete Buttigieg, the mayor of South Bend, Indiana, and one of the many Democrats running for president in 2020. Finally, after months of silence, the news gods finally delivered 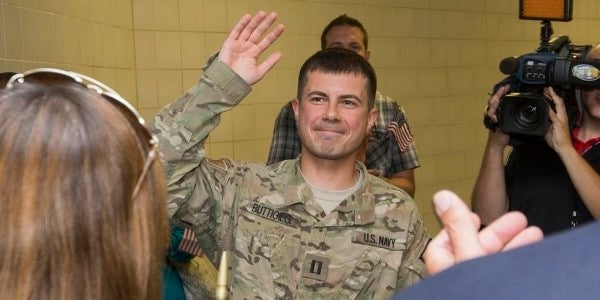 Editor's note: We've been pestering campaign officials since February for an interview with Navy veteran Pete Buttigieg, the mayor of South Bend, Indiana, and one of the many Democrats running for president in 2020. Finally, after months of silence, the news gods finally delivered.

Below, Buttigieg answers questions from Pentagon correspondent Jeff Schogol on the war in Afghanistan, tensions with Iran, and bridging the civil-military divide.

Task & Purpose: Do you consider yourself a combat veteran? Could you explain your answer?

Pete Buttigieg: Some say you are a combat veteran if you have a Combat Action Ribbon (I do not). Others say deploying to a combat zone makes you one. I simply consider myself a veteran, and I'll leave it to others to decide what else to call it.

Mine was not intended to be a combat or maneuver role. Most of my work took place on bases and was focused on identifying and disrupting terrorist finance networks. As always happens on a deployment, I often took on projects and missions that were not part of my original job description, including driving and guarding vehicle movements.

I counted 119 trips outside the wire, mostly driving in Kabul between bases or to engage Afghan partners, as well as the occasional road trip between Kabul and Bagram. Fortunately, everyone in one of my vehicles made it safely to their destination, and I returned home safely as well.

Do you feel it is time for Congress to repeal with Authorization for Use of Military Force (AUMF) that it passed after the Sept. 11, 2001 attacks?

Yes. The reality on the ground is completely different from the one contemplated by the original AUMF. I deployed all the way back in 2014 thinking that our involvement in Afghanistan was coming to an end. I believe the time has come for Congress to repeal and replace that blank check on the use of force and ensure a robust debate on any future operations.

We should never again send troops into conflict without a clear definition of their mission or understanding of what comes after.

Would you ask Congress for a new authorization for force or a declaration of war before ordering a military operation against Iran?

If our service members are willing to summon the courage to go overseas, our Members of Congress ought to have the courage to take tough votes on whether they ought to be sent there in the first place. When there is an authorization for the use of force out of Congress, it should include a sunset provision. If the president wants to renew it, they should have to go back to Congress.

As a Navy veteran and an elected official, what ideas do you have about bridging the civil-military divide?

When I was overseas, the biggest thing I learned was how to put my faith in people who are completely different than me. I wish more Americans had that life-changing experience, but I don't think you ought to have to go to war in order to get it.

That's why the first policy I formally introduced on this campaign was one to dramatically increase paid service opportunities for Americans as soon as they finish high school. I am determined to help repair the division in our nation's social fabric through a call to national service that will eventually deliver a million paid service opportunities a year for people across the country.

The sequel to Top Gun will be released next year. If you had the power to give the movie an unexpected plot twist at the end, what would it be?

Maybe Maverick will retire and run for Senate.

If you were elected president, what would be your strategy for concluding the war in Afghanistan?

The core of the strategy must be a political settlement that secures U.S. counterterrorism interests and the gains that have been made for the Afghan people, especially women. The US can retain special ops and intelligence capabilities without an open-ended commitment of ground troops nor becoming the guarantors of prosperity and stability in the country.

The U.S. has leverage in terms of the timing and manner of our military departure. We should use that leverage to ensure that a political settlement supports our interests and includes the legitimate, elected Afghan government. The strategy should not be dictated by the US political calendar or the personality of our president.

Several veterans of the post 9/11 wars have “bad paper” discharges because they tried to commit suicide due to their PTSD. How would you solve this problem?

No current or former military member of the military should ever be denied mental health care period. Veterans who have service-related PTSD and currently have bad paper discharges ought to have their discharges upgraded so they can receive the VA care and benefits that we owe them. Going forward, active duty service members with a service-related behavior health issue should not receive a bad paper discharge. My administration will do everything to support our service members and to make sure they are taken care of both during their time of active duty and for the rest of their lives.

What do you listen to while working out?

Anything with a good beat. For lifting, more hip-hop and pop are in the mix; for running, more EDM and the right kind of classic rock.

Do you have any tattoos?