"If you have a commander in chief, you better have someone who, when faced a decision to use our military, will know how it will end before deciding if it's wise to begin," said retired Rear Adm. Joe Sestak. 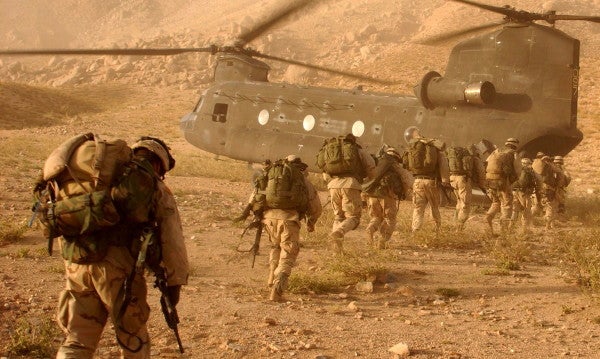 Retired two-star Navy. Adm. Joe Sestak is the highest ranking — and perhaps, least known — veteran who is trying to clinch the Democratic nomination for president in 2020.

Sestak has decades of military experience, but he is not getting nearly as much media attention as fellow veterans Pete Buttigieg and Rep. Tulsi Gabbard (D-Hawaii). Another veteran, Rep. Seth Moulton (D-Mass.) has dropped out of the race.

While walking across New Hampshire on Wednesday, Sestak took time to talk to Task & Purpose about his platform. As president, Sestak would try to broker a peace accord to end the U.S. military's involvement in Afghanistan, but unlike President Donald Trump, he would not exclude the Afghan government from the negotiations.

The United States needs to involve all the players in peace negotiations, including Pakistan and India, which are fighting a proxy conflict by backing opposite sides, he said.

“You're not going to just have us try to do it with the Taliban and then bring in the Afghan government and think that that accord is going to last when the Taliban are going to continue to be fueled by Pakistan, that does have some control over them,” Sestak said. “We need them to own it afterwards.”

He also believes that the Afghan security forces should be cut in half because so many Afghan troops and police officers are corrupt. The U.S. military should focus on making sure that the Afghan government's military and police are “at least competent” by the time U.S. troops leave.

Sestak said his command experiences at sea and ashore have taught him that the U.S. military can stop problems but not fix them. While U.S. troops may won World War II, but it was the Marshall Plan that rebuilt Europe that made sure fascism did not reemerge.

“I tell people: If you have a commander in chief, you better have someone who, when faced with a decision to use our military, will know how it will end before deciding if it's wise to begin,” Sestak said.

As a flag officer, Sestak advocated for building fewer Navy ships so that the service could invest in cyber warfare and other technology. Today, he still believes that the billions of dollars being spent on building submarines could better fund cheaper and more effective weapons systems.

“I believe in defense reform,” he said. “Cyberspace is how we took down the centrifuge with a virus in Iran. We've been slow to do this and I would have defense reform – which you can call a reduction. If an aircraft carrier today strike 10 times the targets it could do 20 years ago … do you want another aircraft carrier or would you rather that money into cyberspace to take down the radar and take down the systems of everyone at a lot less cost?”

After 31 years in the Navy, Sestak retired from the Navy in 2005 after his young daughter was diagnosed with brain cancer. He had also recently been relieved of command by then-Chief of Naval Operations Mike Mullen, reportedly because Sestak had created a “poor command climate.”

Sestak declined to discuss what transpired between him and Mullen.

“He's a fine admiral,” Sestak said. “Do you have another question?”

In 2006, Sestak was elected to represent a heavily Republican district in Congress. He was re-elected two years later, but in 2010 he challenged fellow Democrat Sen. Arlen Specter. Although Sestak won the primary, he lost the general election, ending his career in Congress.

During Wednesday's interview, Sestak stressed the need for the president to work with allies, as President George H.W. Bush did during the Gulf War.

It was clear he was disgusted with Trump's decision to withdraw most U.S. troops from Syria, this leaving the U.S. military's Kurdish allies to fend for themselves.

“I think it was a shameful decision to withdraw away from being with the Kurdish fighters, our allies there on the ground,” Sestak said. “The Kurds, the tens of thousands of them, were the best of fighters with us on ISIS. That decision says something to others out there: Hey allies, we may forsake you. I think that is the greatest of harms.”