Rep. Seth Moulton says US would be ‘no better friend, no worse enemy’ if he’s elected president

"I think our motto as a country should be the same motto we had in the 1st Marine Division: No better friend, no worse enemy." 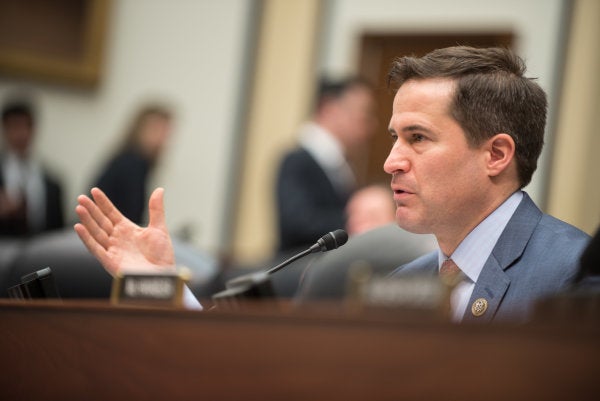 Iraq war veteran Rep. Seth Moulton is distinguishing himself from the other 20 Democrats running for president right now by arguing that he would make a better commander in chief than President Donald Trump.

“I think our motto as a country should be the same motto we had in the 1st Marine Division: No better friend, no worse enemy,” Moulton (D-Mass.), a former Marine captain, told Task & Purpose. “That means standing with our allies and confronting our enemies, not cozying up to them.”

“No matter how you look at it, Vladimir Putin, Kim Jong Un, they are enemies of the United States and we need to treat them that way,” added Moulton, who is one of three veterans vying for the Democratic nomination in the 2020 presidential election.

It is rare for a Democrat to embrace national security issues on the campaign trail. Over the past two decades, Republican candidates have consistently argued for a larger military, higher defense spending, and less White House micromanaging of the Pentagon.

But Moulton's political philosophy has been shaped by his four deployments to Iraq. As president, one of his first orders of business would be to get Congress re-engaged in determining when the United States goes to war. Lawmakers have largely stood on the sidelines since authorizing the Bush administration to attack Al Qaeda in 2001.

“We have got to have a new authorization for the use of military force, and we have to debate it openly in front of the American public so that everybody understands why we're putting American lives on the line overseas,” he said during a recent interview.

In fact, Moulton said he is worried that the Pentagon is spending so much money on the F-35 that it is not investing in newer technologies that might prove decisive in future conflicts.

“I find it hard to believe we're going to need that many F-35s when the Chinese and the Russians are already pushing ahead on autonomous warplanes, pilotless warplanes,” Moulton said. “I think there's a great question as to whether the 6th generation fighter will have a pilot at all.”

If Moulton is elected president, he will inherit the wars in Iraq, Afghanistan, and now Syria. He explained what his strategy would be for each of the conflicts.

With the security situation better in Iraq, Moulton believes U.S. efforts there should focus more on helping Iraq's democracy mature, he said.

In Afghanistan, Moulton favors limiting the U.S. military's role to destroying terrorist groups, including Al Qaeda and ISIS-Khorasan, he said.

“We need to make it clear that we went there after 9/11 for a real and serious purpose,” Moulton said. “That threat still remains. And so we need to counter that threat. But unless we have the will of the Congress and the American people behind us to do more than we should just stay focused on that threat.”

Mindful of the rise of ISIS after U.S. troops left in 2011, Moulton does not want to prematurely withdraw U.S. forces in Syria, he said.

“Having spent three years in the Middle East myself, there's no one who wants to get the troops home sooner than I do,” he said. “But, we can't pull out without a plan.”

At a February hearing, Moulton asked a top defense official point blank if former Defense Secretary James Mattis was wrong when he disagreed with Trump's plan at the time to withdraw all U.S. troops from Syria.

With Mattis' influence on Moulton's thinking clearly evident, Task & Purpose asked Moulton if Mattis would have a place in a Moulton administration.