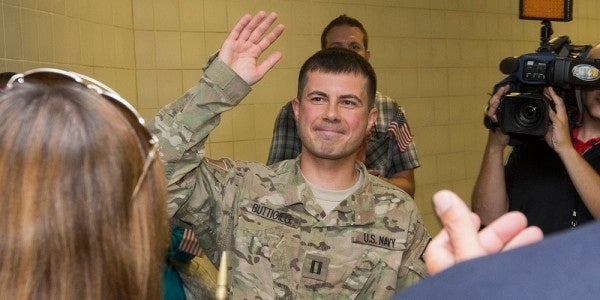 Your humble Pentagon correspondent has never been one of the “cool kids” in the world of Washington media, and never has that been more evident than in my failed attempts to interview Navy veteran Pete Buttigieg, mayor of South Bend, Indiana, and one of the roughly 50,000 Democrats running for president.

Buttigieg served as an intelligence officer from September 2009 until November 2017, leaving the service as a lieutenant, according to his official Navy biography. He deployed to Afghanistan as part of the Afghan Threat Finance Cell in Kabul from March to September 2014. (The Navy initially misspelled his name as “Butigieg” on his uniform.)

“Working long hours, seven days a week, we went after the most dangerous terrorist groups by targeting the connection between narcotics and insurgent financing,” Buttigieg wrote for the South Bend Tribune in October 2014. “I spent some days entirely on research and meetings, other days as a driver and armed escort for my commander and colleagues.”

A picture on social media shows Lt. Buttigieg “on patrol” in Afghanistan. Some Reddit users have noted that he is not wearing his helmet or body armor, so it might not be accurate to say he was on patrol at the time. (Although no one enjoys ripping veterans to pieces more than other veterans.)