The U.S. military’s presence in Syria is a mission looking for a strategy. 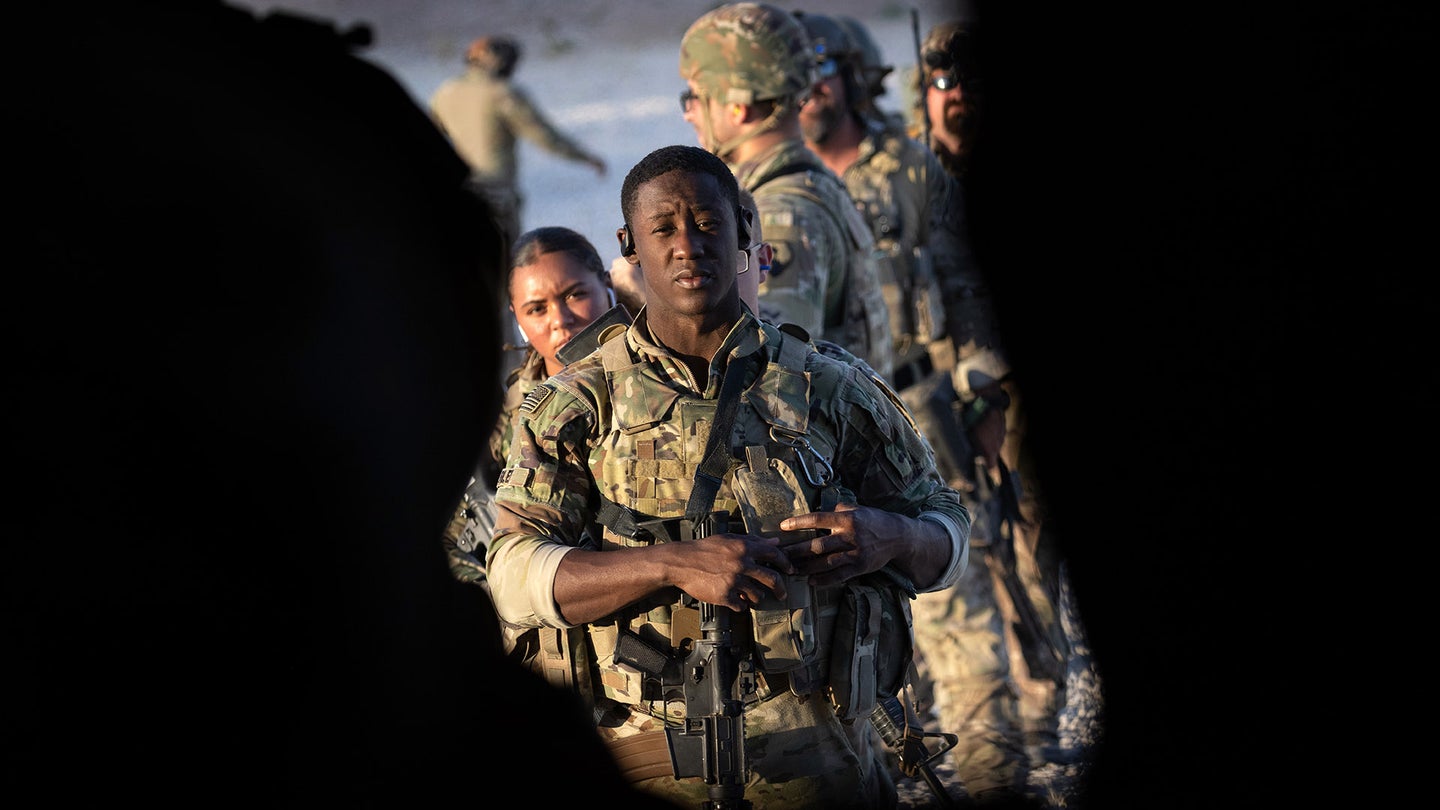 U.S. forces wait to board a CH-47 Chinook helicopter at a combat outpost on May 26, 2021 in northeastern Syria. (Photo by John Moore/Getty Images).
SHARE

The roughly 900 U.S. troops who are currently deployed to Syria are mostly invisible to Congress, the media, and the American public.

Syria is just the latest forgotten battlefield in the Global War on Terrorism. The troops who went there have succeeded in destroying the Islamic State group’s former caliphate, but ISIS fighters are waging the type of insurgency that the American military has a bad track record of defeating.

For the time being, American forces are keeping a lid on the situation and protecting their Kurdish allies from Turkey, who considers them terrorists. But the mission is stuck in neutral. There seem to be no prospects for victory on the horizon but a withdrawal could be catastrophic for the Kurds.

It is long past time for President Joe Biden’s administration to figure out what exactly American troops in Syria need to accomplish and how they can leave without leaving Kurdish allies on the ground to be slaughtered. As long as the mission drifts aimlessly, there is a very real risk that U.S. troops could be drawn into a catastrophic situation, such as the 2017 ambush in Niger that left four brave American soldiers dead, or the 1983 bombing of the Marine barracks in Beirut that killed 241 service members.

These terrible episodes show what can happen when U.S. troops are placed in harm’s way on ambiguously defined missions that are justified by the belief that America must fight terrorists wherever they are.

How did we get here?

With the war against ISIS raging, then-President Barack Obama announced in October 2015 that he was sending dozens of American special operators into Syria, where ISIS fighters controlled a considerable amount of the country. Earlier that month, a Kurdish militant group called the People’s Protection Units, or YPG, joined Arab rebels to form the Syrian Democratic Forces, which have fought alongside U.S. troops ever since.

The Syrian Democratic Forces have proven to be immensely effective at expelling ISIS from northeastern Syria. The last ISIS enclave of Baghouz was captured in March 2019 and ISIS founder Abu Bakr al-Baghdadi was killed by U.S. special operations forces seven months later.

There’s no question that the Syrian Democratic Forces bore the brunt of the fighting against ISIS, but the U.S. government’s tactical alliance with the YPG put it at odds with Turkey, a NATO ally. The YPG is affiliated with the Kurdistan Workers Party, or PKK, which is Turkey’s sworn enemy and designated as a terrorist group by the United States.

Even before the fighting against ISIS was over, former President Donald Trump tried to withdraw all U.S. troops from Syria in 2018, prompting then-Defense Secretary James Mattis to resign in protest.

It was not the last time that Trump tried to withdraw from Syria. Yet after many twists and turns, the U.S. military’s presence in Syria has endured even though the Islamic State group no longer controls any territory in that country – the original reason why American forces were deployed there.

While a senior administration official said the U.S. service members deployed to Syria are part of a broader effort to combat ISIS and al Qaeda, the unspoken truth is that if American troops do have a mission there, it’s protecting their Kurdish allies from Turkey, which views the Kurds as terrorists.

Moreover, the Afghanistan withdrawal provides a cautionary tale for what can happen to American allies when top U.S. leaders stop caring about them.

A whole lot of things can go wrong

The tension between the Kurds and Turkey has long been a powder keg, but instead of having just one fuse, it has several and there’s a bunch of people standing around with matches.

The situation has almost come to a head at least once, and nearly derailed the U.S. military’s entire mission in Syria. All hell broke loose when Turkey invaded northeastern Syria in October 2019 to push Kurdish fighters away from its border. Videos quickly appeared online showing Turkish-backed militia executing Kurdish prisoners.

The U.S. military initially moved about 50 troops out of the path of Turkish forces, but when it became clear the Turks were advancing further than expected, then-Defense Secretary Mark Esper announced that most American troops in Syria would leave the country.

Six days later, Trump tweeted that the United States had “secured the Oil” in eastern Syria, and Esper subsequently announced that the U.S. military was sending Bradley fighting vehicles to protect oil fields around Deir ez-Zor in eastern Syria. For better or worse, that rationale for keeping troops in Syria lasted for the remainder of the Trump administration.

Later, Katie Bo Williams, a reporter with Defense One at the time, revealed that U.S. troops were not directly protecting the petroleum infrastructure controlled by the Syrian Democratic Forces. Furthermore: James Jeffrey, then the top U.S. envoy to the international military coalition against ISIS, admitted to “always playing shell games” in order to obscure the total number of American forces deployed to Syria.

Even though the ISIS caliphate no longer exists, several experts said having American troops in Syria continues to serve a strategic purpose.

“Our mission in NE [northeast] Syria remains the enduring defeat of Daesh,” Marotto said. “The Coalition supports our partner’s efforts in degrading the capabilities of Daesh, such as finance, recruitment, ideological influence and communication to ensure their enduring defeat in NE Syria.”

“Moreover, it keeps us engaged on the topic of ISIS, and other VEOs [violent extremist organizations], and especially detained fighters – whose disposition is still not finally determined,” Votel said.  “Finally, I think our presence is about showing support for a partner that was very valuable to us.”

But the U.S. troops in Syria are also in the middle of an international minefield, where America’s adversaries are carving out their spheres of influence.  Videos emerged last year showing Russian forces harassing U.S. military convoys. In one incident, American service members were injured when a Russian vehicle collided with their M-ATV.

The U.S. government has also accused Iranian proxy forces of attacking troops in both Syria and Iraq. In June, U.S. service members in Deir Ezzor returned fire with artillery in response to a rocket attack that happened the day after American aircraft struck Iranian-backed militia groups on the Iraq/Syria border.

These types of encounters rarely make it into the American news cycle, allowing members of Congress to ignore the dangers that U.S. forces in Syria face. In fact, after Kabul fell to the Taliban on Aug. 15, the White House issued talking points to Democrats that incorrectly claimed there are no U.S. troops in Syria as well as Libya and Yemen.

During a recent Senate hearing on Afghanistan, Sen. Tim Kaine (D-Va.) proudly declared, “I am relieved that for the first time in 20 years, children being born in this country today are not being born into a nation at war.”

Kaine and other elected leaders either don’t know or don’t care that American troops are still at war in Syria, Iraq, and elsewhere in the world. And even though no U.S. forces are in Somalia any longer, the military still launches airstrikes there.

These battlefields are only covered by cable news when something truly disastrous happens, such as the fall of Afghanistan to the Taliban. Despite the neat partisan narrative that America is now a country at peace, the war on terrorism continues every day, even if politicians have convinced themselves that the 2011 Navy SEAL raid that killed Al Qaeda founder Osama bin Laden was a strategic game-changer.

And so the question remains: How long can the military’s mission in Syria stay off Washington’s radar?

While U.S. troops in Syria are preventing eastern Syria from devolving into chaos – which would help ISIS return in strength – they are “merely buying time,” said Jennifer Cafarella, the national security fellow at the Institute for Understanding War research institution in Washington, D.C.

“The U.S. deployment in eastern Syria is sustainable only so long as no actor significantly increases pressure on them,” Cafarella said. Iran’s proxies have begun to escalate against U.S. forces in eastern Syria and could scale up a campaign of rocket and drone attacks in Syria if all U.S. forces do not leave Iraq by the end of the year.”

“Russia is also harassing U.S. forces and seeks to undermine the SDF by fueling tribal resistance that risks destabilizing liberated areas,” she continued. “Finally, the risk of another Turkish incursion into Syria remains high and could provoke a regional escalation between Turkey and the PKK.”

For the time being, Syria will hold the title as America’s latest forgotten war in a growing list of them.