"I haven't found a way to explain it with any words I know," one Marine said. 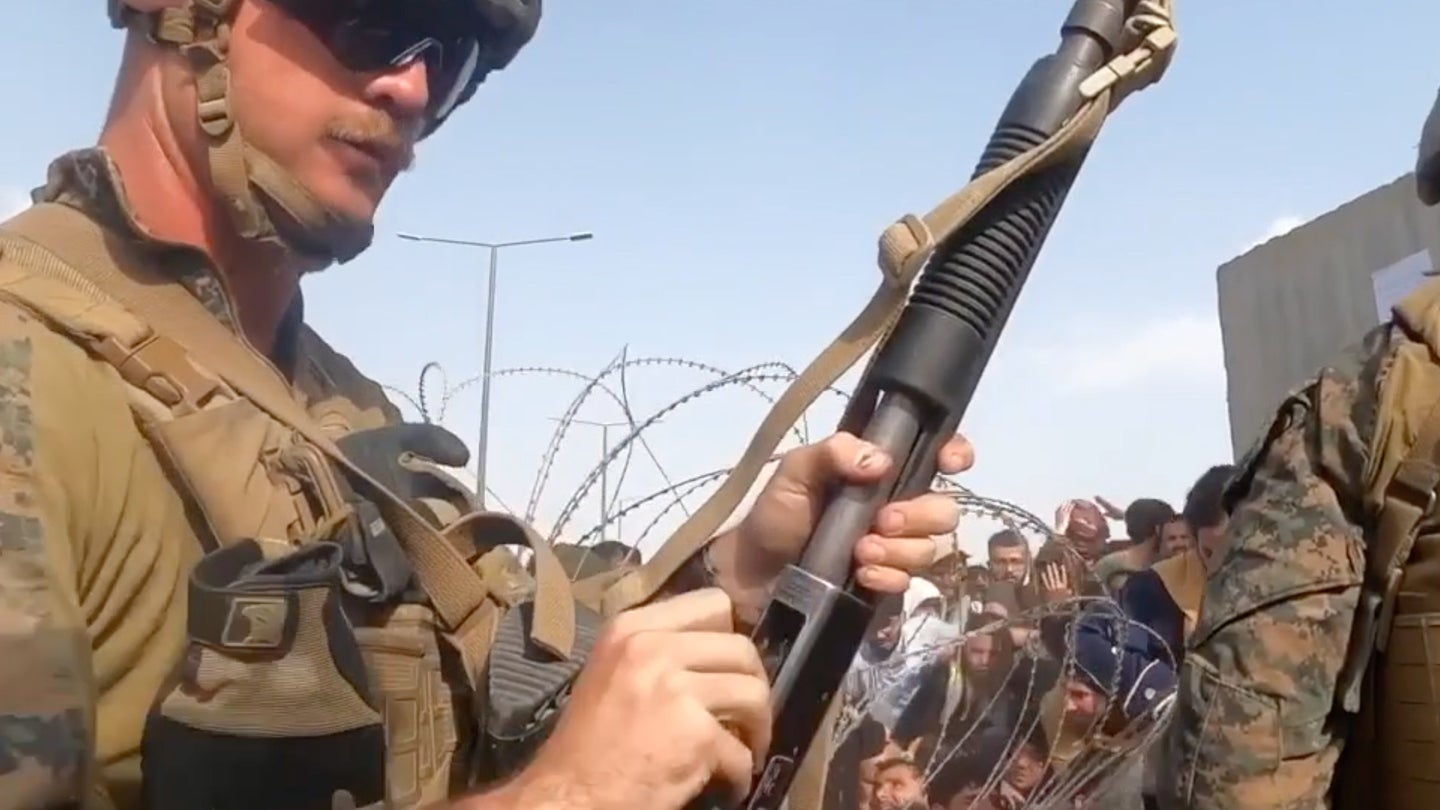 More than 1,000 photos and 60 videos were taken by U.S. military photographers during the evacuation of Afghanistan, but few captured what those chaotic days and nights must have been like for American troops as they attempted to rescue as many people as possible from a seemingly never-ending crowd of desperate Afghans outside the walls of Kabul’s airport.

Now, thanks to a U.S. Marine’s GoPro-shot deployment video, we can see the other side.

The appearance of an orderly and “responsible withdrawal” from Afghanistan comes as no surprise since military photographers are trained on what not to make public and are often told to avoid showing the uncomfortable parts of war. And even when they do capture the realities of combat operations — with the swearing, the unbloused boots and ripped trousers, the shaggy hair and gallows humor, to say nothing of the anger, confusion, and aggression — that version of events rarely makes it through the gauntlet of public affairs officers reviewing outgoing stories, photos, and videos to ensure they align with the “command message” of the day. The visual record of Iraq and Afghanistan has long been filtered through a Department of Defense website where very little goes against the “very specific narrative” the government wants to promote, as one public affairs soldier put it. No profanity or smoking, stick to the hearts and minds stuff, and absolutely no casualties.

“It is easy to get a pulse on what story the military hopes to tell by looking at what images and videos it produces,” military journalist Kelsey Atherton recently noted after studying the “visual canon” of a war propped up by a web of lies spun by top military and political leaders over two decades. The carefully curated gallery of Afghanistan evacuation images, Atherton wrote, showed the “same outward look of calm present in the ‘Afghanistan Withdrawal’ images, of calm established by military order. The reality of this war — its rapid end and live aftermath —  is missing. There’s nothing here about the drones used for a ‘self-defense unmanned over-the-horizon airstrike,’ the euphemism given by the Pentagon for an attack on a suspected suicide bomber. That attack reportedly killed ten civilians, including six children.”

Yet U.S. Central Command released images of a “ramp ceremony” at the airport in which service members carried the caskets of 13 service members killed in the terrorist attack at Abbey Gate on Aug. 26 to the planes that would fly them home. Some journalists were surprised since such images are rarely seen publicly without a lawsuit. There was a good reason for skepticism: They were uploaded by mistake.

“These photos were posted in error and have been removed from DVIDS,” said Army Lt. Col. Karen Roxberry, a spokesperson for U.S. Central Command. “They are provided to the next of kin with the footage from the dignified transfer at Dover [Air Force Base].”

Still, the official images are not staged. More than a few Afghan children were cradled in the arms of Marines and soldiers, more than 124,000 people were loaded into Air Force C-17s and other aircraft and brought to safety, and an Army two-star general was the iconic “last American service member to leave Afghanistan” that generated headlines around the world. But that was only half of the story of the end of America’s longest war. The other half was provided by a Marine from 1st Battalion, 8th Marine Regiment in an eight-minute-long video that he shot and edited himself before posting to social media.

“I hope this answers questions but also provokes you to ask more,” Cpl. Mike Markland captioned the video on Instagram. “To my brothers and sisters who were there I made this for you and your family. When you have the lack of ability to explain all that happened in those two weeks, show them this. Stand tall and wear the last two weeks on your chest.”

“I haven’t found a way to explain it with any words I know,” he added. Instead, Markland stitched together clips from a GoPro camera taken over “two straight weeks of worsening conditions” on the ground. Like other deployment videos, the Marine takes viewers with him on the flight to Afghanistan and then to the front lines of the airport gate and onto the ending fist bumps given to rescued Afghans. It’s a firsthand perspective that is much closer to what it was truly like.

“Many of us joined because we liked fighting and were good with adversity and conflict,” Markland wrote. “Two weeks in Kabul at HKIA put all of that to the test. I can’t say enough how proud I am of the Marines I serve with.”

Contrasting the narrative to emerge from military public affairs, which borders on, and at times crosses over into outright propaganda, Markland’s video showed both the good and the bad, and the latter was far more prevalent. Utter chaos is filmed outside the Marine-guarded gate as tear gas is fired. An Afghan writhes in agony after being pushed into concertina wire at the front of the crowd. A Marine fires a bean bag shotgun round at a man. And tens of thousands of desperate Afghans are depicted outside the walls as they truly were: dehydrated, dazed, and terrified.

Within the safety of the airport walls, the conditions weren’t much better. Too many people clogged up the few toilets inside. Trash and filth were everywhere. So were stacks of AK-47s, PK machine guns, M-16s, and other weapons presumably left by the Afghan military after the country collapsed.

“Odds were stacked against us,” Markland wrote. “Circumstances undeniably out of our control, but we never let it deter our tenacious approach towards our mission at hand. Adversity and challenges happened 24/7,” he added, noting that many crises were happening at the same time, and “almost all had no predesignated plan. We did our absolute best and remained stoic through the sleepless nights and round-the-clock work with minimal food and water. Staying up for two or more days straight at a time grinding but remaining intensely vigilant.”

Also unseen until Markland’s video went viral were the special moments of levity that service members know well. When Marine grunts weren’t in a frenzied situation trying to rescue people or provide security on the airport walls, they rested and talked smack to each other, smoked cigarettes and dipped, and even rode bikes.

The video finally ends with Markland fist-bumping Afghans as they walk by.

You can watch the entire video below: