During a recent mission to Syria, Marines with the 11th Marine Expeditionary Unit fired off upward of 4,500 rounds of... 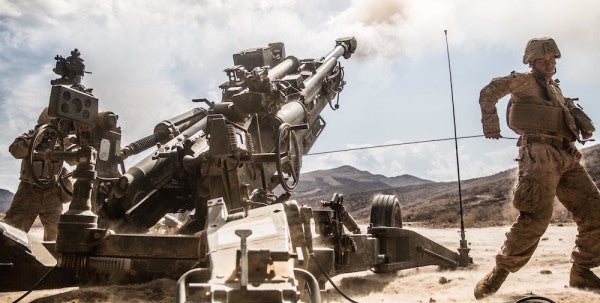 During a recent mission to Syria, Marines with the 11th Marine Expeditionary Unit fired off upward of 4,500 rounds of ammunition against ISIS, 11th MEU spokesman Maj. Craig Thomas told reporters on May 24.

An artillery unit entered Syria in early March to support Kurdish and Syrian Arab Forces isolating Raqqa, ISIS’ de facto capital in the country. The news of the Marines’ presence in Syria broke at the same time that Army Stryker combat vehicles were seen in the Manbij area.

The number of rounds fired was one of the only details that officials were able to discuss, according to Marine Corps Times’ Jeff Schogol, who was present for a roundtable discussion with Thomas on May 24.

It’s an ongoing operation,” Thomas said. “We have another Marine unit that’s there – to my knowledge, they have not released that name, so we’ll let [Operation Inherent Resolve] do that. It’s not exactly an established theater as Iraq or Afghanistan was.”

The capacity in which these Marines have been aiding Kurdish and Syrian Arab Forces for the last two months is largely unclear, but the detachment is connected to the larger 11th MEU, which had been deployed with the Makin Island Amphibious Ready Group for seven months and recently returned home to San Diego earlier this month.

In all, roughly 400 members of 11th MEU deployed to Syria. These Marines have since been replaced by a different Marine artillery unit, but the unit has not yet been named publicly. Marine Corps Times speculated that the replacement unit likely belongs to the 24th Marine Expeditionary Unit, which is currently deployed with the USS Bataan’s amphibious ready group. On April 23, the 24th MEU uploaded and image to its Facebook page, which showed artillery Marines at Camp Buehring in Kuwait, firing M777 A2 howitzers at an artillery range.