The day-to-day ground truth for U.S. troops involved in the fight against the Islamic State in Iraq has been shrouded... 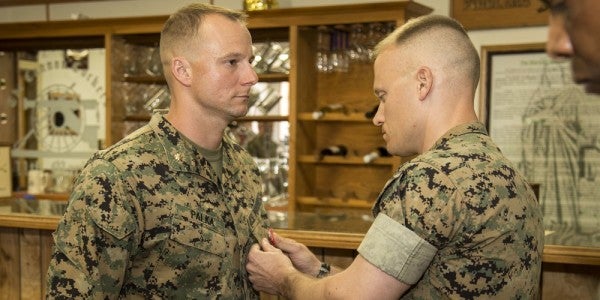 The day-to-day ground truth for U.S. troops involved in the fight against the Islamic State in Iraq has been shrouded in relative mystery. It’s been characterized by politicians and reporters as an “advise and assist” mission, in which American forces train and manage local troops, largely avoiding direct combat. But new information obtained by Business Insider’s Paul Szoldra shows that the men of one particularly cloistered Marine artillery battery were under near-constant threat of enemy attack, taking fire more than a dozen times during a two-and-half month stretch at Fire Base Bell in 2016.

Maj. David Palka, the commander of that unit — Echo Battery, 2nd Battalion, 10th Marines — was awarded the Bronze Star Medal with “V” on May 1 for leading his Marines during the violent stretch in an austere and isolated artillery position near the front line in the fight against ISIS. Business Insider reconstructed much of the Marines’ activity from interviews with Palka and his subordinates, as well as from government documents.

The Marines of Echo Battery were the first conventional U.S. ground troops to set up a semi-permanent artillery position when they dug themselves into the small outpost on March 12, 2016 — a watershed moment in a conflict that had been fought mainly from the skies, after American forces had withdrawn from Iraq in 2014. Their mission was to provide fire support to Kurdish and Iraqi security forces in the fight against Islamic State militants, Szoldra writes:

“The base was small and had no creature comforts, and troops dug holes where they would man their guns, fight, and sleep.

‘It was austere. There was the constant threat 24/7,’ Palka said. ‘My other deployments, you'd come back to a . Or we'd remain on a FOB and shoot fire support in support of maneuver. We didn't have an adjacent unit to our left and our right. We were the only general-purpose ground force forward. There was no wire.’

The Pentagon tried to keep the presence of Marines in Iraq quiet, but those efforts were thwarted one week after Palka arrived.”

On March 19, the fire base was hit by rocket fire from roughly 15 miles away, according to Business Insider. The attack killed Staff Sgt. Louis Cardin and injured eight others. During the attack, an Army counter-battery radar site homed in on the enemy position, and from there Palka calmly directed the artillery fire, while assessing casualties and calling for medical evacuations.

The field artillery Marines had four M777A2 Howitzers at the base, which they used to zero in on enemy ISIS positions and decimate them, firing more than 2,000 rounds during 476 missions between mid-March and late May 2016, according to a Department of Defense news release.

On two other occasions, the base was subjected to coordinated attacks by ISIS fighters:

“I'd say that ISIS and the enemy that we encountered in Iraq this past time … they were more bold — the fact that they would infiltrate the forward line of troops and attempt to engage a Marine element with foreign fighters,” Palka said. “Their weaponry and their tactics were more advanced. They were more well-trained than any other force that my Marines had directly engaged on previous deployments.”

While Szoldra’s profile of Palka is interesting and compelling in its own right, it also illustrates how much the truth on the ground differs from the one presented in government press releases and shared across news wires.

It’s the stories from Marines on the front, the information they’ve gleaned about the fight they’re in, and the citations they’ve earned, that paint a more complete picture of a deeply complex operation — one that is still rooted in relative secrecy.