Mattis Plans To Unleash An ‘Annihilation Campaign’ On ISIS

The noose is tightening around ISIS’s neck — and Secretary of Defense James Mattis has a plan to finish the... 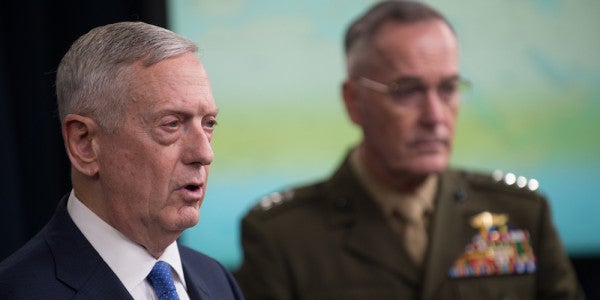 The noose is tightening around ISIS’s neck — and Secretary of Defense James Mattis has a plan to finish the job.

Speaking at the Pentagon on Friday, Mattis announced that President Donald Trump had ordered DoD officials to conduct an “accelerated operation” against ISIS, focused on “encircling” ISIS fighters in the strongholds, before executing major ground and air strikes against militant targets, Reuters reports.

“[Trump] directed a tactical shift, from shoving ISIS out of safe locations in an attrition fight, to surrounding the enemy in their strongholds so we can annihilate ISIS,” Mattis told reporters Friday.

The shift in tactics has reportedly accelerated ISIS’s decline by “leaving the beleaguered fighters with no avenue of escape,” preventing dispersed ISIS forces from simply regrouping elsewhere in the region for a renewed campaign against the U.S.-led coalition, the Washington Examiner reported.

“The foreign fighters are the strategic threat should they return home to Tunis, to Kuala Lumpur, to Paris, to Detroit. Wherever,” Mattis said. “By taking the time to deconflict, to surround and then attack, we carry out the annihilation campaign so we don't simply transplant this problem from one location to another.”

Mattis’ announcement comes amid news that the ISIS fighters, who have endured a months-long siege in the strategically important Iraqi city of Mosul, are reportedly on “the brink of defeat,” as Operation Inherent Resolve spokesman and U.S. Air Force Colonel John Dorrian put it during a news conference in Baghdad.

It’s not yet clear how this change will affect the size and scope of U.S. troop deployments to Iraq and Syria.

Shortly after Mattis said that U.S. government would continue to support Iraqi security forces, the Army announced plans to deploy 250 soldiers from the III Corps Headquarters at Fort Hood to Iraq and Kuwait as part of OIR.

Mattis said that he had yet to make a recommendation to Trump regarding U.S. troop levels in Afghanistan, but would consult with Trump on the matter “soon.”

In May, DoD officials announced their intent to request Trump order the deployment of between 3,000 and 5,000 more combat troops to Afghanistan to help break the “stalemate” with Taliban forces.

The next week, the Washington Post reported that the White House’s decision on troop levels would depend on the number of NATO forces the organization plans on committing to the 16-year campaign in the country.

Speaking in Brussels on May 17, Joint Chiefs Chairman Gen. Joseph Dunford told reporters that NATO “will continue with a fairly modest contribution in the near term and that political leadership in the coming months will discuss the potential for NATO assuming a greater responsibility in Iraq.”