Happy Mattis Day: The Plan To Defeat ISIS Is Due Today

Well, it’s February 27. You know what that means. Today is Mattis Day. On January 28, President Trump signed an... 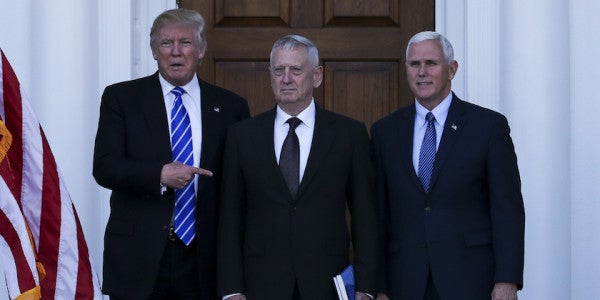 Well, it’s February 27. You know what that means.

On January 28, President Trump signed an executive order directing Secretary of Defense Jim Mattis to deliver a comprehensive plan for annihilating the Islamic State. That homework came with a 30-day deadline, and it’s due today.

You can read the original order online. Technically it’s actually not an order. It’s a memorandum. But it’s firm. None of this fuzzy-wuzzy “degrade and eventually destroy” bullshit. We’re talking about “a comprehensive strategy and plans for the defeat of ISIS.” Period.

By the way, you may have noticed: they are no longer called ISIL. The name is ISIS. They know it, and we know it.

Wish Obama would say ISIS, like almost everyone else, rather than ISIL.

Indeed, the mystery of why Obama was so insistent on the weird-sounding acronym ISIL lives on. If he really wanted to degrade them, why didn’t he just call them Da’esh, which they supposedly hate? Donald Trump offered one holy-shit theory during the campaign, which is that Obama actually founded the group himself — with an assist from Hillary Clinton.

That seems far-fetched, to be honest. Then again, if true, that means the new commander-in-chief has already sidelined the Islamic State’s two top leaders, so he’s clearly doing something right.

As for Mattis’s plan, it will almost definitely bring ISIS a world of hurt. As he put it in an interview with Stanford’s Hoover Institution before being tapped to head up the Pentagon, the former general favors engaging the group in “battles of annihilation — not attrition, but annihilation … so that the first time they meet the forces that we put against them, there should basically be no survivors.”

It’s fair to assume the new National Security Advisor, Lt. Gen. H.R. McMaster, will favor a similarly aggressive approach. As DefenseOne pointed out, “His previous comments suggest that he’s skeptical of surgical special operations raids and drone strikes absent a realistic plan to change political realities on the ground.” McMaster has argued that our strategic mistake in Iraq stemmed from a failure to “consolidate gains.” He’s not big on leading from behind. “It’s very difficult to achieve sustainable political outcomes from standoff range,” he has said. On the other hand, McMaster is also not a big fan of the President’s “radical Islamic terrorism” rhetoric, believing that it plays into the Islamic State’s “battle of civilizations” ideology and damages our ability to work with necessary Muslim allies.

Whatever we finally decide to call the enemy, the plan for their defeat will almost definitely include a stepped-up role for U.S. military personnel. It may also involve supplying additional arms to the Kurdish YPG, widelyconsidered to be the most effective fighters currently taking on ISIS. The Obama administration approved this approach shortly before the inauguration — despite longstanding concerns about enraging our allies in Turkey, who consider the Kurds a mortal enemy. Trump is said to have dismissed the plan, but Mattis may wind up throwing it in the mix anyway. That is, if the plan even approaches that level of detail. Trump is said to favor one-page memos with no more than nine bullet points. And according to Pentagon spokesman Capt. Jeff Davis, the plan will be “an outline of a strategy.” When you really think about it, 30 days is not a lot of time to develop a truly comprehensive approach to one of the most complex and intractable foreign policy conundrums the nation has ever faced — a geopolitical clusterfuck involving Russia, Syria, Iran, Turkey, Saudi Arabia and a dizzying array of militias and factions.

By the way, it’s not like this is the only thing Mattis has had on his plate lately, what with reassuring our European allies that we still support NATO. And reassuring Japan we will protect them from China. And reassuring South Korea that we won’t let them get nuked. And reassuring Iraq that we’re not going to take all their oil. And reassuring the media that they’re not about to be rounded up and sent to reeducation camps.

No wonder he doesn’t sleep much.

Even so, 30 days is kind of tight. But here’s the good news. President Trump doesn’t actually need a new plan from Mattis at all. He already has a “foolproof plan,” as he put it more than 18 months ago. It is “a method of defeating them quickly and effectively and having total victory.”

Best of all, Trump’s idea is remarkably simple. “It’s like the paper clip,” he explained in an interview with Iowa radio host Simon Conway. “You know, somebody came up with the idea of the paperclip and made a lot of money. And everybody said, ‘Why didn’t I think of that?’”

Which does raise an interesting question: why didn’t Trump reveal the plan way back then in 2015? After all, doing so would have presumably saved thousands of civilians from being killed, raped, maimed, crucified and enslaved. Moreover, it would have enabled many more to remain in their homes rather than fleeing in terror, becoming refugees and trying to “pour into” the U.S., as he likes to put it.

Trump offered two reasons for his reticence: First of all, he explained, “problem is, everyone’s going to take the idea, run with it, and . . . people forget where it came from.” In other words, Obama would just cash in on his paperclip. And second: to reveal the idea prematurely would be to tip our hand to the enemy.

In a subsequent interview with 60 Minutes, however, Trump did tease the basic outline of this grand strategy. “Maybe let Russia do it,” he hinted. “Let ’em get rid of ISIS. What the hell do we care?”

Presumably, Mattis will present a different approach. But if not: Get ready, ISIS. Russia’s coming for you, and they don’t play.