The War Against ISIS Is Far From Over

One year into the Trump administration, what are the most complex challenges facing the U.S. military? This is the first... 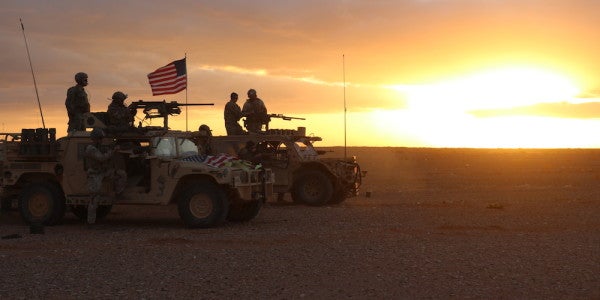 One year into the Trump administration, what are the most complex challenges facing the U.S. military? This is the first installment of THREAT WEEK, our brief series spotlighting some of the Pentagon’s biggest obstacles ahead of President Donald Trump’s first State of the Union address.

ISIS may have suffered major territorial defeats under an onslaught of U.S.-armed regional partners and coalition bombs, but the terror group is far from routed in Iraq and Syria despite the efforts of Operation Inherent Resolve.

According to Laith Alkhouri, co-founder of intel group Flashpoint and director of its Jihadist Threat Intelligence service, even without territory to call its own, ISIS “remains strong as an organization, with stronger and more organized ranks and ideology” than when it first moved into Syria in 2013. “The group will likely up the ante in its guerrilla warfare, with main retreat zones like the Anbar desert in west Iraq, while also directing its cells in places like Baghdad and Damascus,” Alkhouri told Task & Purpose.

Beyond a protracted battle to retake footholds in Iraq and Syria, Alkhouri notes that ISIS increasingly embraced the decentralized, franchising model that’s spurred successful and attempted terror attacks in cities like London, Paris, and New York without direct coordination from a command post in the Middle East and North Africa. The caliphate may be routed from its urban strongholds of Mosul and Raqqa, but the foreign fighters returning home and domestic “lone wolves” following ISIS from afar who both increasingly comprise the non-state actors that are central to the Trump administration's Jan. 19 National Defense Strategy will remain a constant source of anxiety for security forces worldwide.

“It has elevated its incitement of followers around the world, not merely with messages and propaganda, but also with practical advice to attack using available methods, like cars and knives,” Alkhouri told Task & Purpose. “ISIS will likely continue inciting its followers to launch terror attacks on its behalf. It will likely highlight its loss of territory and the coalition attacks — among others — as central topics in its propaganda.”

Related: T&P;'s Full Coverage Of The US Military Campaign Against ISIS »

This means an uptick in coordinated ISIS attacks in places where the group’s networks have grown significantly but its commanders don’t necessarily exercise a significant command-and-control influence. According to Alkhouri, those places mean distant battlefields where the United States “isn’t actively involved militarily” like Egypt or has only some “advise and assist” presence like the Philippines, Yemen, Niger, and weak states across Central and Southeast Asia. The weaker a nation’s security environment, the more likely ISIS is to spread there, especially in countries already subject to social and economic turbulence

“ISIS is re-morphing into a terror organization,” says Alkhouri. “What it’s been able to accomplish throughout the last few year is a robust radicalization machine, bringing the group the support of thousands around the world. Well after the group is potentially defeated as a dominating entity, its ideology remains alive and well online.”

An Iraqi security forces member provides security near a patrol base in Mosul, Iraq, June 22, 2017. A global Coalition of more than 60 regional and international nations have joined together to enable partner forces to defeat ISIS and restore stability and security.U.S. Army/Cpl. Rachel Diehm

The picture looks pretty grim despite a landmark year in the U.S.-led campaign — a picture that includes a lower probability of withdrawal than telegraphed by Trump administration officials. “ISIS and other terror groups heavily operate in regions where U.S. troops are involved, and withdrawing from such regions could only create further security challenges for local forces,” Alkhouri says. “Our advise-and-assist missions will require more proactive U.S. participation than merely training forces and providing them with weapons.”

The one thing everyone’s missing: Terror financing, namely thanks to the likes of Bitcoin. “There’s a chance that pro-ISIS persons will dabble in cryptocurrency and online spamming campaigns, among other methods, to raise funds for the terror group,” Alkhouri says. “We saw few examples of that over the past 1.5 years with minimal importance. However, that might not be the case going in the near future, especially as spamming and cryptocurrency tutorials are easily found online.”