In late October, the Armed Forces of the Philippines (AFP) declared victory over the ISIS-inspired Maute group after a five-month... 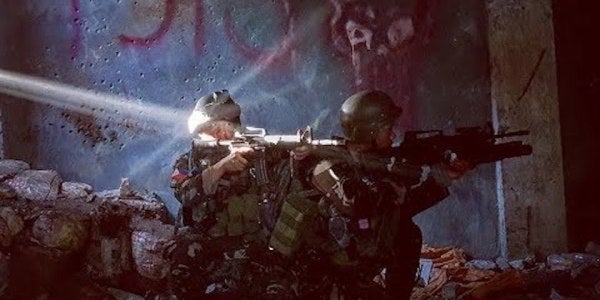 In late October, the Armed Forces of the Philippines (AFP) declared victory over the ISIS-inspired Maute group after a five-month pitched battle left more than 1,000 dead in the sprawling city of Marawi. The siege, which prompted President Rodrigo Duterte to declare martial law and the Pentagon to deploy an unidentified detachment of special operations forces, finally culminated with the deaths of two top terror leaders. Now, more than a month later, the AFP’s own elite forces are taking a victory lap.

On Nov. 28, the AFP’s Special Operations Command published an eight-minute sizzle reel detailing the rise of the ISIS-inspired groups and AFP special forces’ months-long struggle to expel them from the city:

We’ve had to sit through plenty of disconcerting (if informative) ISIS propaganda videos as the terror group made its last gasps in its former Iraqi and Syrian and strongholds of Mosul and Raqqa, so the AFP clip is pretty sweet, even if it’s a highly produced state public relations product.

At the same time, there’s one thing worth noticing in this video: the non-presence of the many U.S. special operations forces deployed to the Philippines — ostensibly to provide “technical support” against Islamist groups. It’s possible that American commandos are present in the footage and simply dressed out like their Philippine counterparts rather than in distinctive U.S. uniforms; they’ve done that before, with the black kit worn by the Iraqi military’s elite Counter Terrorism Service’s “Golden Division,” which the American operators assisted during the battle for Mosul last March.

There’s no footage of the deployed U.S. SOCOM forces in DVIDs, the military’s public affairs imagery database … nor would you expect there to be; perhaps American special operators remained quiet professionals while deployed in the Philippines, even in someone else’s touchdown dance.