An explosion at a military base in the restive southern Philippines on Friday killed five people, including three soldiers, and wounded nine others in what Islamic State said was an attack by its suicide bombers 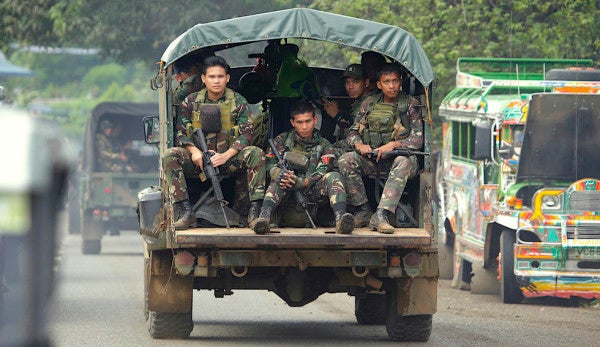 MANILA (Reuters) – An explosion at a military base in the restive southern Philippines on Friday killed five people, including three soldiers, and wounded nine others in what Islamic State said was an attack by its suicide bombers.

The military said the blast occurred at around noon at a base on Jolo island, a stronghold of the Abu Sayyaf, a splintered militant network notorious for kidnapping and piracy and for its pledge of allegiance to Islamic State.

Islamic State said via its Amaq news agency that its fighters had infiltrated the base strapped with explosives and killed or wounded 100 soldiers. It posted an image of two young men standing beside a black Islamic State flag, wearing what appeared to be vests designed to hold explosives.

Neither the claim nor the authenticity of the photograph could be immediately verified.

The incident will be a major setback for Philippine President Rodrigo Duterte's goal of wiping out Abu Sayyaf, for which he has created a special infantry division on Jolo to be comprised of 4,500 troops by 2022.

The army provided few details of what took place, but vowed a thorough investigation and to respond “with formidable resolve”.

“Ground troops continue to establish the circumstances and identify the perpetrators behind this inhumane attack,” said Cirilito Sobejana, chief of the Western Mindanao Command. “We will intensify our offensives to crush terrorist groups.”

Clashes between troops and Abu Sayyaf have intensified in the wake of a January bombing of a Jolo church that killed 21 people and wounded close to 100, among them soldiers and civilians. Islamic State also claimed responsibility for that assault.

Duterte has maintained martial law across the Mindanao region to curb Islamic State's influence and the decades of banditry by Abu Sayyaf, which is known for its brutality and for posting videos of captives begging for their lives, and for beheading those for whom ransom demands are not met.

A Dutch wildlife photographer held hostage by Abu Sayyaf since 2012 was killed last month by his captors when he tried to escape during a firefight with troops, according to the military, which said six rebels were killed.