Hey, Coasties: What would you do if you had millions of dollars? 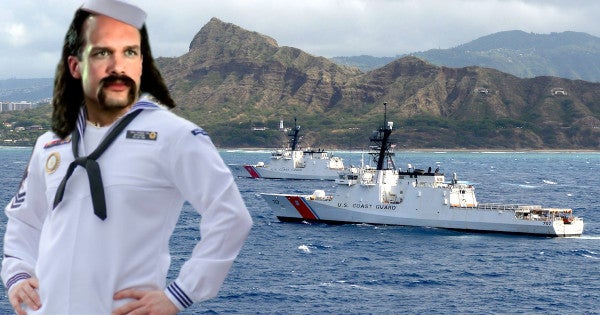 Hey, Coasties: What would you do if you had millions of dollars? Well, I'll tell you what I'd do: Two cutters at the same time, man.

The Coast Guard welcomed its two new national security cutters, the Kimball and Midgett, to the fleet on Saturday in an unusual double commissioning ceremony at Base Honolulu, the cutters' new homeport.

The two 418-foot cutters are, at $670 million apiece, the seventh and eighth Legend-class cutters designed for “the most challenging national security missions, including support to U.S. combatant commanders” thanks to advanced command-and-control capabilities and “an unmatched combination of range, speed and ability to operate in extreme weather,' according to the Coast Guard.

The Coast Guard has certainly been putting its newest vessels to work. National security cutters Bertholf and Stratton have both deployed to the Western Pacific this year under the watchful eye of the Navy's 7th fleet, part of Coast Guard Commandant Adm. Karl Schultz stated vision of the service's “permanent presence and effectiveness” in the region.

The Bertholf even became the first Coast Guard cutter to transit the Taiwan Strait when it accompanied the Arleigh Burke-class guided-missile destroyer USS Curtis Wilbur on a freedom of navigation mission there in March amid growing tensions with China.

“These national security cutters will continue our 150 years of partnership and commitment to the Pacific region — since September 1849, when Revenue Cutter Lawrence sailed into Honolulu Harbor escorted by Native Hawaiians in outrigger canoes,” Schultz said on Saturday.

“In today's complex geostrategic environment with rising great power competition, the importance and demand for a strong Coast Guard presence in the Pacific has never been greater.”

There's only one appropriate response to Saturday's double commissioning: F–kin' A, man … F–kin' A.